On Monday morning, Hong Kong media reported that the barricades around Admiralty would be removed after two-plus weeks of bulwarking pro-democracy protesters in their concrete campground near government offices. The evidence was right there on the tele: moving pictures of police clearing the roads! And so, after lunch, I found myself in a friend’s dad’s car going from Wan Chai in the direction of our final destination in the western Mid-levels. We had just gotten onto Queensway and could see Pacific Place, a luxury complex of business and commerce, when we encountered… a barricade.

As we were figuring the proper detour, middle-aged and slightly older men at the scene became suddenly animated by an unexplained rage. We exited the vehicle to this ruckus amid growing layers of interested and camera-phone-toting bystanders. As the men rushed in to dismantle and drag out the barricades, which scraped loudly against the asphalt, they were met by resistance in the form of young people, first one, then others, possibly students, who stood defiantly in front of vehicles. (Yes, the obligatory reference to Tiananmen Tank Man was overheard.) They sat in the middle of the road to form a human barricade:

No one should have been surprised at the resistance. After bunkering down in their cove of dissent, dozing in tents and showering in makeshift facilities, passionately, thoughtfully, and artfully pleading their case, in multiple languages, to anyone who would listen, did authorities really think the protesters — organized and motivated as they are — would quietly step aside to watch their movement extinguished by a giant-claw douter?

Every time authorities have tried to step in, the protests have flared as a result, like an angry flame. Two and a half weeks ago, they tried pepper spray and tear gas, inadvertently giving this movement its distinctive symbol – the umbrella. But popular support for these protesters was beginning to wane last week — at least among Hong Kongers, who increasingly see the protests as a nuisance — when the government made yet another boneheaded decision. It announced, then retracted on Thursday, a meeting with student leaders. Why? In a very non-rhetorical sense, why? Why, if you decide to schedule a meeting — option A – wouldn’t you go through with said meeting, maybe try to win a bit of positive press before using that momentum to cast the Hong Kong Federation of Students and Scholarism as stubborn, callow, and unrealistic? Why, if option B is to never engage, wouldn’t you actually not engage, and let the momentum slowly fade, the protest starved out by boredom, school, and work? Indeed, the worst thing the government could have done was option C: rescind a promised talk one day before the weekend. Predictably, protest numbers skyrocketed. Here’s what it looked like from my vantage point on Friday: 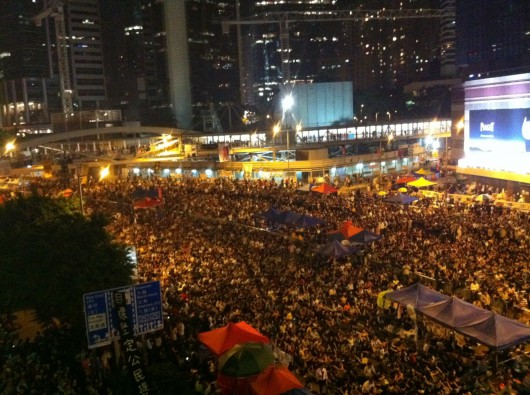 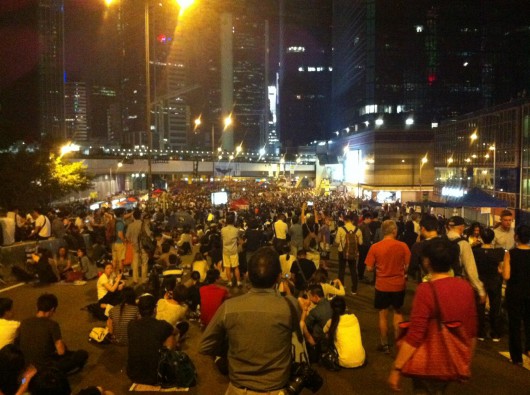 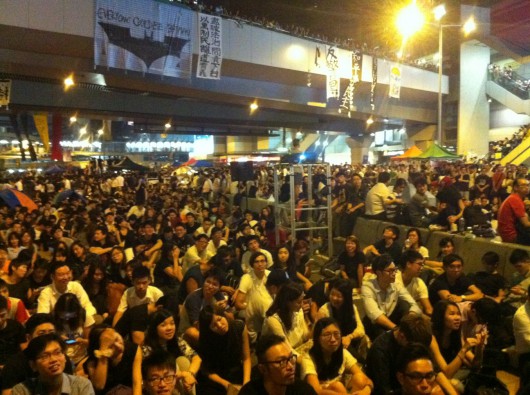 And then, today, while barricades were going down, they were being built — and deployed – just as quickly:

Students mix up cement in #causewaybay to reinforce new barricades after police dismantled some… http://t.co/6oppFy8Eh5

Recent reports are that city officials have now gone to Guangzhou for a forum. Government… leaders… what are you doing? 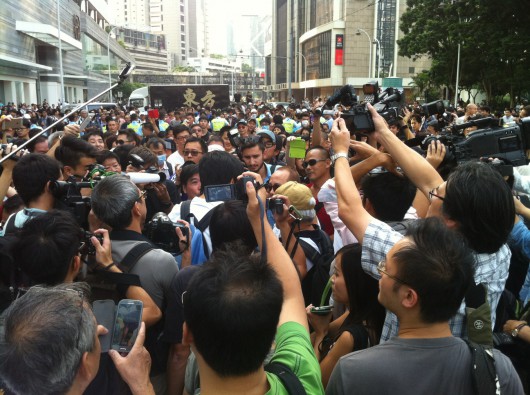 But here’s where it gets tricky. On the corner of Queensway and Tamar, the opposition was not reciting pro-government slogans, extolling the Communist Party, or Leung Chun-ying. They were upset*, sure, but their anger and frustration was directed at the protesters’ actions… not the values they represent, but the hard fact that they had incapacitated the day-to-day lives of many and threatened livelihoods. And all for what? The choice to elect leaders who, in the end, will still be beholden to Beijing? (This isn’t a popular reality, but Hong Kong relies on mainland China and will only rely on mainland China more in the coming years… but that’s a different story.)

*QUICK INTERLUDE: “Go fuck your mother,” an old man screamed at some Occupy protesters. Another man, also fairly senior and on the side of the anti-Occupy folks, blurted, “Don’t curse, don’t curse.”

They chanted, “Open the roads!,” “Clear the area!,” and “Rubbish!” (Thanks to Alicia for the translations.) Signs read, “Retake the road, I’ve suffered enough,” “Save my rice bowl,” and “Hong Kong is my home.” Some, I suppose it should be noted, spoke Cantonese with mainland accents; many others did not. On the other side, protesters sang “Congratulations to you” sarcastically. “Please leave peacefully,” a man in an orange shirt appealed, though it was unclear who he was addressing. “Please protest elsewhere.” He was expressing a sentiment I’ve heard often lately: fighting for what you believe in isn’t wrong, but preventing other people from making a living probably is.

How should we feel about these people? They are called the “anti-Occupy group,” but that term is problematic. It works on a literal level, describing those who oppose the folks occupying Central, but it has a ring of unpleasantness, doesn’t it? As if this nebulous group, in addition to being anti-protest, were also anti-justice, anti-democracy, and anti-Hong Kong. But let’s call them what they mostly are, shall we? Taxi drivers. Restaurant owners. Small business owners. Their spouses. People who understand the grass isn’t always greener on the other side, and who mistrust college students who lecture them about the future. This “group” is not a faceless, masked opposition against values that Westerners on Twitter hold dear. These are the people who will ultimately decide whether this movement moves forward or subsides, because they are the ones who are skeptical — never mind the spirit of the protesters, their optimism, their courage and grace – about whether they can sustain a 30 to 50 percent reduction in business.

And where do we go from here? Maybe hold hands and hope better decisions are made from the top to facilitate — not hinder – a resolution. No one wants to see Hong Kong fight Hong Kong.

As a postscript: a commendation for the Hong Kong police, from the low-level blue shirts to the plainclothes cops who are asked to rove the streets to find violence to defuse. They inserted themselves between pro- and anti- groups on Monday afternoon and basically kept the peace. There’s time yet for the police to bungle a future task, but so far they’ve performed admirably under difficult circumstances. 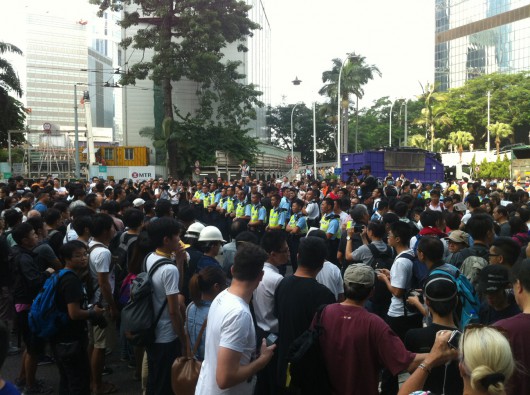 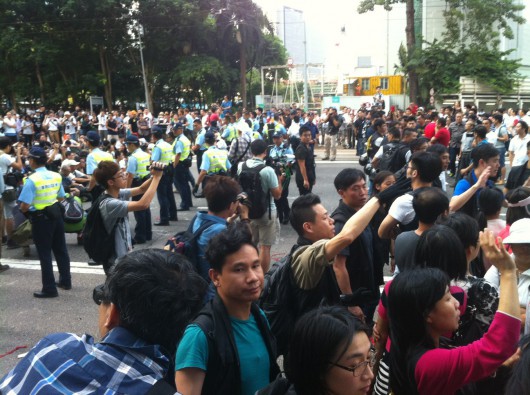 That’s a plainclothes cop in the foreground, along with his comrades forming a protective line

As another postscript, here’s how the main Occupy protest area looked during the daytime while skirmishes happened a few blocks away:

Leave a Reply to Zouy