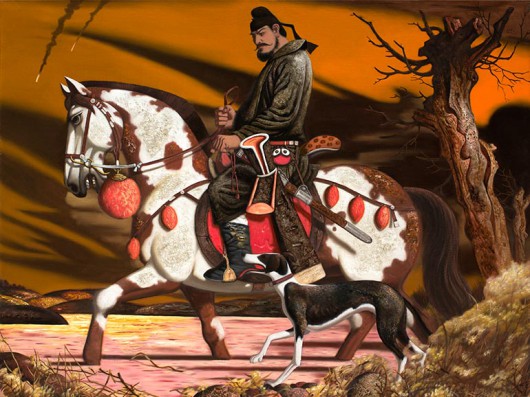 Artists and writers seeking the pinnacle of Chinese civilization often turn to the Tang Dynasty, an era of openness and innovation credited with fostering some of the finest art and poetry in the history of Han civilization.

It’s no surprise that such an amazing era would provide similar inspiration to Xu Songbo, a professor at the Tianjin Academy of Fine Arts, who attempts to capture the Tang spirit in his breathtaking oil compositions. They are collected in Tang Feng, his exhibition open until this Thursday at New Millennium Gallery in 798 Art District.

Xu focuses on the Tang Dynasty’s obsession with horsemanship and the hunt. Lin Yuan Ta Ge Tu depicts a well-dressed rider taking in the northern scenery. In Xia Ke Xing, a mounted archer searches for prey as his horse charges ahead.

Few creatures other than horses and humans make an appearance in Xu’s works. “I grew up in the 70s, and our generation had comic books instead of cartoons. Most of the comics told the stories of ancient dynasties, and the horse was the finest vehicle of the era,” he said. “Horses have been burned into my mind since childhood.”

But Xu’s works show as much of his own affinity for equines as the noble animal’s status in Chinese culture.

The horse arrived in China with the charioteers of the Shang dynasty (1600-1046 BC). By 400 BC, they had become a symbol of prestige in addition to a tool of warfare.

Judging by idiomatic expressions, the horse is second only to the dragon among China’s beloved animals. A willful person is often compared to “having the vigor of a dragon or a horse,” and horses are said to pave the way to success. Some scholars even judge the success of ancient dynasties by the development of their horse culture.

“If we evaluate Tang by such criteria, it would be the heyday of the nation,” Xu said.

Tang rulers embraced the horse like no other Han-founded dynasty. The majority of cultural relics like the Six Steeds of the Zhao Mausoleum and Tri-color Horse prove that argument. Tang’s equine obsession has its roots in the Xianbei, an ancient group of Mongolic nomads who once dominated today’s eastern Mongolia, Inner Mongolia and Northeast China. Historical records show that the founders of Tang were Han Chinese generals who had been in the employ of the Xianbei state. As military men experienced in nomadic warfare, they brought the love of the horse to the imperial court.

Tang was one of the greatest powers in the world during its era, annexing many of its neighboring states and maintaining diplomatic relations with South and West Asian powers, the Abbasid Caliphate and a handful of European nations. For tributary states in the Tarim Basin or Transoxiana, fine steeds were a customary gift for the court.

The Tang Dynasty may have been the most cosmopolitan era in China history. Long noted for its religious tolerance and comparatively free exchange of cultures, Tang’s pluralism is something Xu attempts to reflect in his paintings. In Qiu Feng Jin, several of the men are depicted in the costume of other ethnic groups and wielding distinct weapons.

“As an artist, Xu uses positive energy to recast the zeitgeist of bygone eras in the perspective of modern people,” said Zhang Siyong, the curator. Xu previously explored traditional culture in his Chang Feng and Dao Wen series.

“When I was a little boy, the poems my teacher taught gave me an obscure impression about Tang,” Xu said. “I started to understand it better when painting comic books in university.” He continued his studies in the Mural Painting Department of the Central Academy of Fine Art.

But Xu’s attempt to recapture the spirit of Tang Dynasty is the result of an uncomfortable fact: Chinese culture is wandering further and further from its roots. Although many now recognize the importance of preserving China’s cultural roots, few take any meaningful action to preserve them.

Xu says Han costume fans and students of literature only preserve the shell of Chinese tradition while losing sight of its spirit. From his point of view, the spirit of traditional culture can be summed up as one of confidence, freedom, tolerance, wisdom, romance and initiative.

“It will take the effort of several generations to find our roots – the spirit of traditional culture,” Xu said. 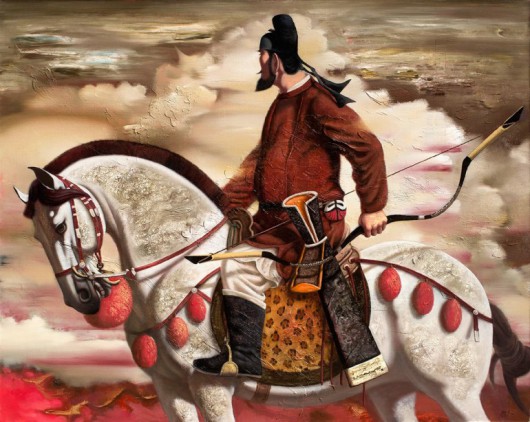 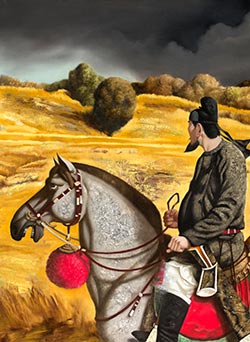