We have two videos from the stabbing this morning, in which a man wielding a meter-long sword attacked — seemingly at random — two people outside Uniqlo in Sanlitun, Beijing. The first video, above, is graphic, and I wouldn’t recommend it if you’d rather not watch a woman bleeding from stab wounds.

We’d like to point out this guy, casually strolling by the scene of two bloody stabbings: 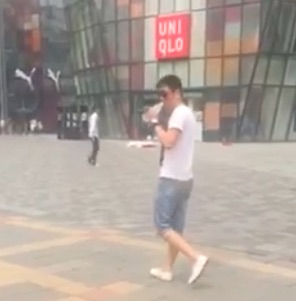 In the video below, the attacker, when approached by police, simply gives himself up by laying down his sword and getting on his stomach.