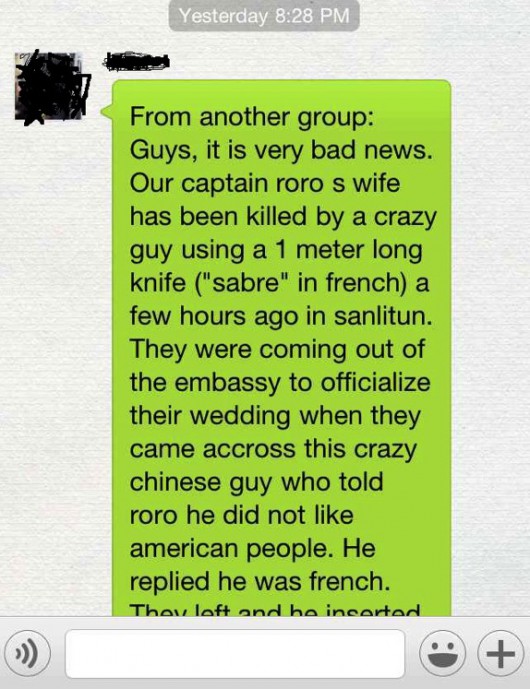 Sina Weibo’s watershed came in 2011 after two high-speed trains crashed in Wenzhou: as officials bungled the response, and then censored news stories, netizens stormed onto Sina’s microblogging platform to voice their outrage and fill gaps of knowledge with educated speculation. Four years later, just as Weibo has seemingly run its course, a different program is stepping into its place as the prime facilitator of unfettered discussion in this country of shackled exchange.

As far as watershed moments go, WeChat’s was notably less newsworthy in the classic sense: it was a sex scandal. Yet it was significant because the sex only became a scandal after — or the exact moment when — a message was transferred from one man’s phone onto another’s via this Tencent chatting platform. By the time the now-infamous Uniqlo sex video reached traditional media — traditional, these days, referring to the Internet — practically everyone who cared had seen it, or knew it existed.

This brings us to the horrific stabbing yesterday morning — outside, of all places, the Sanlitun Uniqlo that nestled into our collective consciousness only a month prior — details of which revealed itself almost exclusively on WeChat. Perhaps this seems unextraordinary, considering how fully WeChat has uplinked with most of our lives. But let’s pretend, for a moment, it were not possible to dart in and out of six separate chat rooms, to easily compare discrepancies in different tellings of the same story, to pose questions to dozens of people at the same time. How many instant messaging windows would you have opened? How many text messages sent? Phone numbers dialed? There was a time not long ago when we’d have to go to the scene to sniff for answers, if that’s what we wanted. Upon being stonewalled by official sources, you’d have to inquire of strangers, and then you would still only have a small piece of the puzzle.

Consider how many of us learned about the victim, the Chinese woman who was stabbed in the back (and how did we know it was the back?). It was likely from the following message, currently going around WeChat, sent from a person who knows both the woman and the foreigner who knelt over her:

Guys, it is very bad news. Our captain roro s wife has been killed by a crazy guy using a 1 meter long knife (“sabre” in french) a few hours ago in sanlitun. They were coming out of the embassy to officialize their wedding when they came accross this crazy chinese guy who told roro he did not like american people. He replied he was french. They left and he inserted his long knife inside isabelle s back.. Trying to defend her, the knife went inside roro s belly twice…. Isabelle died right after she made it to the hospital. Romain is going through an operation now because it was bleeding inside his body..This happened exactly 2 years after the murder of an american citizen in joyce city..I can t find the words… Huge shock

Hours earlier, “My friend knows someone who knows the girl,” someone may have said in a group you’re in.

And those videos from the aftermath of the attack? Found on WeChat, of course.

As human beings we are inclined to gossip, and WeChat is currently the best tool for our time and place. It has tapped into our instinct to share and learn. Once upon a time, in a bygone age, we would gather around TVs for the 6 o’clock news, thus was our instinct to know and to know collectively. Well, China doesn’t air real news — nothing we can trust, I mean – and who has time for the television anymore? With WeChat, we get all the angles, sometimes simultaneously. We gather sources that we deem credible, and ignore those a bit too eager to forward rumors. We build a story, confirm or deny that story against the observations of others, and pass it into other groups. The transference of knowledge, from one bubble to the next, is seamless and swift. If we thought print media was slow before, print journalists are practically tablet engravers in this age of the intranet. No story published tomorrow will contain information that a smart and plugged-in smartphone user won’t have already obtained from multiple sources tonight.

The service won’t render the Internet obsolete, but it makes certain parts of it less vital: Sina Weibo, with all its ghosts and overseers? Who needs it. Twitter, that echo chamber with character limits? It’s fast becoming a place where the oldest of old-media hang out, those who haven’t ingratiated themselves into enough group chats. Facebook? LOL.

But WeChat, of course, did not rise out of pure innovation. Sure, it’s faster than microblogs (which are faster than blogs, etc.), and more tailored – you can choose who to follow, what groups to join or leave — but it would be much less useful if it were restrictive. That is, if messages were routinely censored, and certain topics disallowed. In other words, if it were a mobile version of Sina Weibo, which has been punished often enough that it will gladly stifle user participation to avoid offending sensibilities.

Finally, WeChat has the ability to create action, similar to 2009-11 Twitter (before Twitter became suddenly dead). A person — any person — can propose an action, and if it makes enough sense, creates enough momentum and gains enough support – all organically, of course, like a snowball — it will translate into movement. Ultimately, for as comfortable as virtual spaces have become, users still seek to translate their virtual conversations into real-world activity. For an example, check out this message currently making the WeChat rounds:

Here is what we all should do: Tomorrow, take a little time out of your day and go leave flowers and/or positive messages on the ground where it happened. We have to change the mentality here, enough with this “If I help, I’ll get in trouble” or “China doesn’t value people’s life” excuses. You can be black, white, yellow red or blue it doesn’t matter, bottom line is this, if you are in China YOU are CHINESE, you want to make China a better place then make it happen. So tomorrow let’s all show that we care, that life matters and that we are concerned by deposing flowers. People might look at you, judge you, ask you to leave but keep in mind that it is because you are doing the right thing. Let’s all make sure that tomorrow by the end of the day, all wechat moments are filled with pictures of flowers, and trust me, by night, people will light candles all over the place. This is how you change mentality, this is how you show you care about something, by doing something as simple as deposing a flower. So what’s your excuse?

I’m not saying there will be “candles all over the place” by nightfall tomorrow, but I’m willing to believe a few people will lay flowers. We’re just talking flowers, by the way, but authorities will notice. They’ll think, Next time, what if it’s not just flowers commemorating the innocent victim of a random attack? What if it’s, say, to commemorate a self-immolation at Tianamen? (Guess where I learned about the man who purportedly set himself on fire at Tiananmen last night?) What if it’s… something bigger?

It seems almost impossible that WeChat escapes official censure. It’s too easy to use, and thereby too dangerous. And this is how an innovative piece of technology that’s born in the People’s Republic of China dies there. Eventually, the only thing left to destroy will be censorship itself.

6 Responses to “The Age Of The Intranet: WeChat Gets Its Weibo Moment”