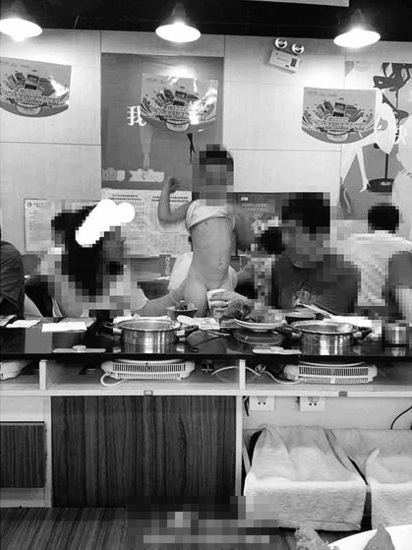 You’ve probably seen kids peeing and pooping in the streets of China — and you would turn a blind eye to it, I’m sure — but have you ever seen a boy peeing into a paper cup, held by his father, at a hotpot restaurant, over food, in front of all the other diners? At the risk of implicating myself in a future child porn sting, I will mention his shirt is lifted and trousers dropped to just above the knees. Now I will try to erase this image from my head forever, while not peering at the picture I’ve just uploaded.

This happened on August 2 at a hot pot restaurant called Xiabuxiabu, and made the August 7 edition of the Chinese newspaper Legal Mirror. Global Times tells us in its two-paragraph write-up yesterday that there’s a video floating out there somewhere. (We tried to find it but could not, somewhat thankfully.) Also:

Waiters at Xiabuxiabu hot pot in Wangjing, Chaoyang district, did not intervene on August 2, despite customer complaints. The restaurant Monday admitted that they did not properly handle the issue.

We do wonder about the identity of the person who took the picture, but that might be hard to track down, considering how many versions of this photo now exist on Sina Weibo. Most comments are about what you’d expect. A lot of people chide the parents. One netizen posted a thumbs-up emoticon, which was… different. “Bring your own alcohol,” writes another.

We’ll end with this: how the picture looked in the Legal Mirror, if you can believe this image – which I’m pretty sure could get most adults into trouble if found in a roll of film at your local Walgreens — actually made it into a publication: 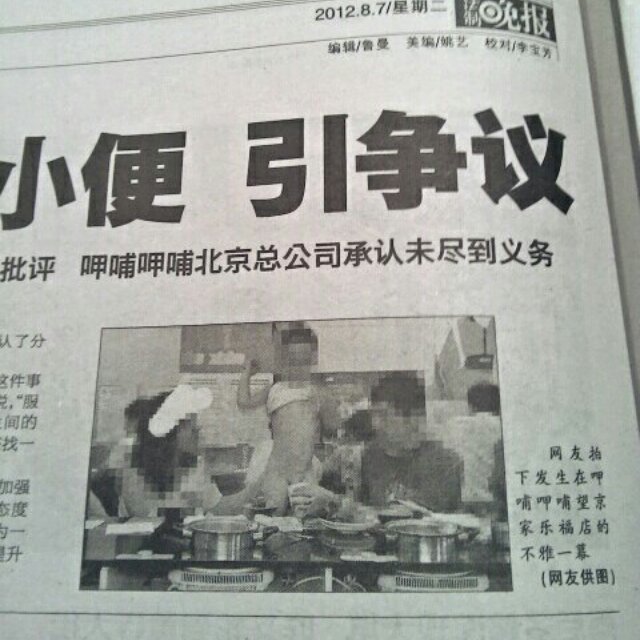 10 Responses to “Found In Chinese Media: Public Urination Has Never Looked Like This Before”