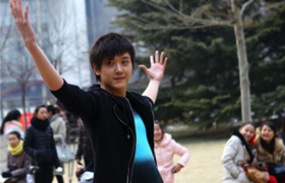 More than an hour after we published the latest edition of Yishus, in which Lola B wrote, “Chinese students go to art school to make money,” but the “the main path, if not the only path, into a top art school is through the art gaokao (college entrance exam) that judges technical skill alone,” China Daily published a cover story on essentially the same subject, except its approach — as the headline will suggest — was quite different:

Path to stardom starts with an exam

In seven words, we come face-to-face with everything that’s wrong with China’s campaign of soft culture, its interpretation of what art is and its expectation for what art does: this country’s next generation of creative leaders are whittled down by an exam, and art is merely a vehicle for fame. Meanwhile, China’s largest English-language newspaper, writing a cover story for its USA and China editions, seems oblivious to the fact that something might be wrong with that.

To win an Oscar is to reach the pinnacle of the movie world.

As the glitterati hit the red carpet in Los Angeles for Hollywood’s 84th Academy Awards on Sunday, about 1 million wannabe stars in China will be preparing for another annual event that could help them emulate their heroes: art college entrance exams.

And what kind of questions are on this test?

A blogger recently reprinted what he or she said was a copy of a test paper for applicants to the Beijing Film Academy’s editing program. It included questions on PM2.5, which has been in the news due to environmental concerns, and asked what United States Vice-President Joe Biden had eaten when he visited Beijing last year.

Just so we’re clear, this means someone in charge of the admissions process at China’s top film academy believes one’s ability to edit film is correlated with his or her knowledge of current events. I think it’s completely admirable to want your students to be newshounds, but you do see the major problem here, right? By setting up an assessment with right/wrong answers — i.e. Biden ate at Yao Ji Stewed Liver, which is presumably the correct answer, even though “rice” or “his tongue” would be equally accurate — you will inevitably attract only students who are very good at taking your tests. And that creates even more problems.

Students applying for art colleges have to take multiple rounds of tests, but it’s important to note the major difference is applicants don’t have to score as high on the gaokao — the national college entrance exam that everyone takes. As a result, thousands of students are applying to art colleges simply because they’re easier to get into.

I give props to China Daily for broaching this subject. The dean of Beijing University of Technology’s art and design college estimated that “just 20 percent of students at the school are real art lovers.”

But it leaves me with a question for the estimable paper’s editors: possibly instead of propping up this system as a “path to stardom,” shouldn’t we be investigating ways of tearing it down? Shouldn’t we linger, at least one sentence, on what “stardom” means? Why remain so blissfully clueless on this subject, even after printing back-to-back paragraphs such as these:

A quick search on the Internet produces a list of schools offering training programs, with prices ranging from 10,000 to 60,000 yuan, depending on the number of hours and class sizes. Some even guarantee in advertisements that, after completing their course, students will be able to pass an exam set by top film academies.

As the average student applies to about 10 art colleges across China, the biggest drawback about the warm-up training and the exams is not the expense but the long distances students and their families need to travel.

Oh. The biggest drawback isn’t paying up to 60,000 yuan for pure bunkum (“guarantee in advertisements that… students will be able to pass an exam”… what grade of horseshit is required to set off a reporter’s alarm?). No, the biggest drawback is how far away these cram schools are.

Tian Lin, a senior at Beijing University of Technology’s art and design college, said she moved from her hometown in Central China’s Hunan province to the capital in October 2007, giving herself five months to prepare for the entrance examination.

Oh. Beijing is far away from Hunan province.

Isn’t the problem here that students like Tian Lin think it’s necessary to travel from Hunan to Beijing to take entrance exam prep courses? Maybe I’m being a dick for expecting too much out of Chinese journalism, but shouldn’t Tian Lin’s story be the lead and not some throwaway line about the fucking Oscars?

Jiang Nan knows firsthand what life is like for a struggling artist.

After finishing her studies in vocals and music performance at the China Opera House in 2002 she discovered that a dream can quickly become a nightmare.

“I’d dreamed of being a singer since I was little, but after I enrolled at college I found the business is very different from my imagination,” she told China Daily, adding: “Some things are just out of your control.”

“I decided to quit singing and become a salesperson for a decoration company in Beijing, largely due to financial reasons.

It seems, then, that “stardom” is a purely mythical construct created by dream peddlers and exploited by people who run training programs that charge 10,000 to 60,000 yuan, not so much a destination as a process that requires years, possibly even decades, of work. I’m reminded of this excellent, purely practical piece of advice from National Public Radio’s Ira Glass:

“Nobody tells this to people who are beginners, I wish someone told me. All of us who do creative work, we get into it because we have good taste. But there is this gap. For the first couple years you make stuff, it’s just not that good. It’s trying to be good, it has potential, but it’s not. But your taste, the thing that got you into the game, is still killer. And your taste is why your work disappoints you. A lot of people never get past this phase, they quit. Most people I know who do interesting, creative work went through years of this. We know our work doesn’t have this special thing that we want it to have. We all go through this. And if you are just starting out or you are still in this phase, you gotta know its normal and the most important thing you can do is do a lot of work. Put yourself on a deadline so that every week you will finish one story. It is only by going through a volume of work that you will close that gap, and your work will be as good as your ambitions. And I took longer to figure out how to do this than anyone I’ve ever met. It’s gonna take awhile. It’s normal to take awhile. You’ve just gotta fight your way through.”

And I’m reminded of what Lola B had to say about this, a full hour before China Daily bumbled its way toward almost making a point:

Here in China, with the market still booming and students able to put up a “show of their very own” in any old abandoned space, the dream is still alive. I just don’t want to be the one to tell them that in a few short years, art schools will become oversaturated, collectors will be wiser, and the competition will be cutthroat. And then it’ll be those creative wunderkinds who can create dreamscapes for the real world who will be rewarded.