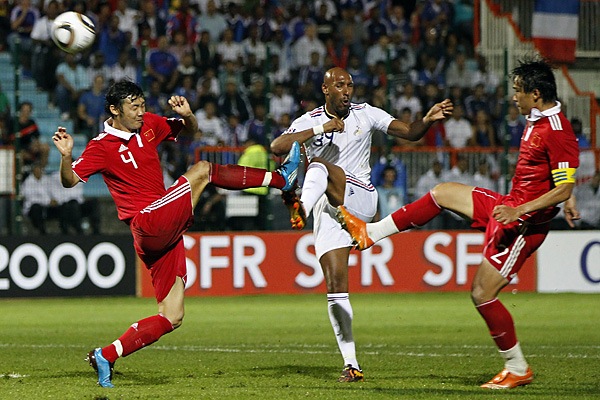 Before you go racing to Workers Stadium though, you should know Anelka — the former Chelsea and French national team star — may not play tonight due to injury (game-time decision). Also, you may not want to chant “French Concession,” considering the last guy who used that phrase publicly got fined 47,500 yuan. And really, the taunt only works if Anelka scores an own goal. But all that aside – it’s Beijing Guoan FC’s home opener, which is always exciting; Guoan finished 2nd last year in the Chinese Super League and won the whole damn thing in 2009; and the opponent is Shanghai. Do we need to remind you how much we hate Shanghai?

Anyway, after the jump, a few more creative ways to tell Le Pout to — in American vernacular — suck it. And readers, be more like E, who g-chatted “French Concession” to me, and submit some heckles of your own.

“All I keep thinking of are jorts.”

Tonight also marks the homecoming of former Guoan star Joel Griffiths, who plays for Shanghai. Think Johnny Damon going from the Red Sox to the Yankees. It’s like that. Sort of. Probably not.

2 Responses to “‘You Just Made A French Concession!’ And Other Heckles For Anelka At Tonight’s Beijing Guoan Home Opener”