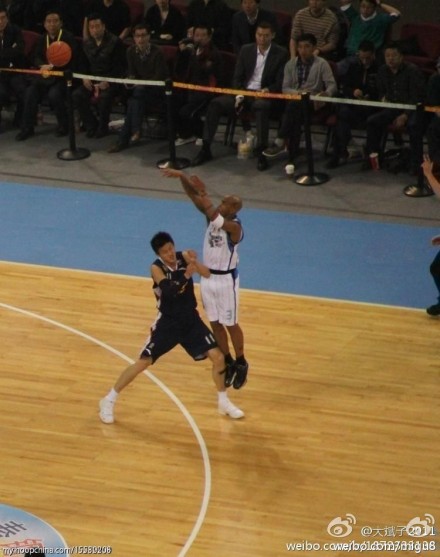 Jon Pastuszek over at NiuBBall has added an incredible detail in a post titled “Beijing-Guangdong Game 1: The night the CBA was at its best and worst” (first uncovered among English-language China blogs by China Sports Review):

Yet the most amazing was that [Guangdong] Coach Li, a man who has won seven CBA championships, was the one who ordered the hit.

One good thing about CBA telecasts (and there are few, trust me), is that they don’t cut to commercial during time-outs. Instead, they go inside each team’s huddle so viewers can listen (and sometimes see, when players aren’t blocking the camera) what the coaches are saying. When the cameras went into Coach Li’s huddle, here’s what they recorded.

Zhou Peng, one of four Guangdong players who represented the National Team in the 2010 FIBA World Championship, understood perfectly. Hence, the sweeping of Marbury’s leg and the attempted elbow to his face that went extra. Unable to stop Beijing from winning fairly, Guangdong had resorted to its Bill Lambier catalogue.

Watch my video from yesterday again; the detail I failed to notice is that Zhou Peng, before aggressively fouling Marbury, indeed tried to sweep his legs. It’s mind-boggling that any player would resort to those tactics, but now that we understand he did it at the behest of his coach, I suppose that somewhat lets him off the hook? (Stanley Milgram, a nation turns its lonely eyes to you.) Will the administrators over at Youku now let my video off the hook because the blame is no longer on China national-team players? (Marbury himself said in a Sina article that he’s “accustomed to trash talk” because he did, after all, play in the NBA, and that he wasn’t bothered by Su Wei telling him off.)

As for what all this reveals, says Pastuszek:

Guangdong, winners of seven out of the last eight championships, [has] been exposed as a dirty, classless team.

Measured words, my friend. Myself, I would’ve been overwhelmed by my northerner’s bias (this is a Beijing blog, after all) and said something about them doing it extra dirty in the south. Knaves, all.

POSTSCRIPT: Pastuszek reports Beijing was fined 110,00 RMB for “uncivilized behavior,” almost twice the amount that Shanxi was fined for doing this.