Tudou video for those in China after the jump. UPDATE: Video of accuser and Marbury’s response: “He got a wild imagination.”

First, let me say as plainly and firmly as possible that the end of last night’s Beijing-Shanxi game was a joke. I’ll repeat here what I tweeted last night in apoplexy: the referees were intimidated by Shanxi’s fans and gave the game to the home team. They were scared because at least one of them got accosted at close-range by a charging rhinoceros of a surly fuck (1:32 mark in above video), and they were scared because debris rained out of the stands (1:40 mark), causing the Beijing Ducks to huddle around mid-court, where Beijing’s Randolph Morris almost got into a fight with one of Shanxi’s Chinese players (1:53 mark), while the PA announcer shouted, “Fans, calm down!” Shitstorm? Approaching Category 5.

(Shanxi fans have a reputation of throwing things onto the court when things don’t go their way. They did it during both of Marbury’s first two games in the CBA two years ago; I was there both times.)

Oh no. Oh not even close…

After the game, Shanxi fans allegedly blocked Beijing’s bus (Binhe Stadium is quite small, with only one way out of the parking lot, and every fan knows exactly where the team buses are parked). It was between the Binhe Stadium exit and the team bus that Stephon Marbury allegedly assaulted a fan.

As reported by Sina, if you believe Taiyuan Evenings News (via Weibo), Marbury hit first.

If you believe the Beijing players, fans attacked first.

Sina reports: “The bus that the Beijing team was traveling on was surrounded and attacked also. The bus was attacked for approximately one hour before it left the stadium.”

Check out the below video. Yes, those are fires being lit.

Beijing’s general manager, Yuan Chao, said: “Our players only knew of the media reports about Marbury attacking a fan after they arrived back in Beijing. After we discovered this, we were all very shocked. Because in that situation, Marbury could not have attacked a fan.”

“After the game last night, we left the stadium at around 9:40 pm. As the players walked through the players’ tunnel to go to the bus, the head coach was standing in the front and Marbury was the last. Next to Marbury was his translator and the players’ trainer. When we exited the stadium, there were many fans crowding around outside. They were shouting loudly abusively. When we exited, there were also two security guards who had to help us barricade a path. So when Marbury exited, he had his translator and the two security guards  next to him. When he exited, the fans didn’t just shout out abuses loudly, but they also threw things at the players, such as stones and water bottles. At that point, our players were just ducking and covering their heads. Under that situation, Marbury couldn’t have thrown a punch at a fan, let alone kick continuously.”

Marbury himself said from his hotel room that there was “no reason” for him to attack. He said that his team had just lost, why would they not just try to get on the bus and leave?

How seriously injured was the fan that Marbury allegedly attacked? This Sina report shows a doctor’s note from Shanxi University No. 1 Hospital. The injured party reported pain to his lower back. Doctor’s recommendation: rest in bed for two weeks; return for check-up in three days. 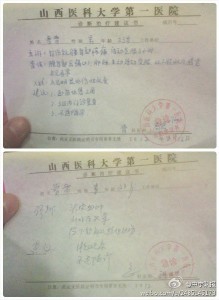 Here are more Sina photos (two sampled below) of the post-game mayhem. 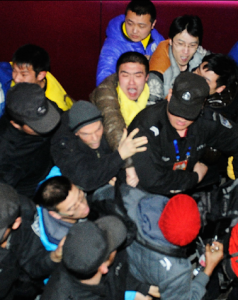 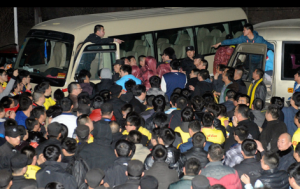 We think Marbury is the one in the red cap. CBA, you seeing this?

So what precipitated this in the game itself?

In the waning moments of the fourth quarter, Marbury drove hard to the hole and accidentally elbowed his defender, who reacted by pushing Marbury and earning a technical. Marbury hit three of four free throws to give Beijing the lead.

Down 100-97, Shanxi’s Marcus Williams then drove the lane, only to get his shot swatted by Beijing’s Randolph Morris. The refs rightly didn’t call a foul, but fans decided to take things into their own hands. The game was delayed ten to fifteen minutes as overmatched security guards and feckless PA announcers urged order.

Said Marbury in the post-game interview (emphasis mine):

It was a hard-fought game. We played well enough to win the game. At the end of the game, an incident happens like that and no penalty, the home team is able to throw water bottles on the court and stop the momentum. The ball went out of bounds. I mean, it gave them an opportunity to draw up a play. At least 10 minutes. I mean, how do you play a final, how do you play a semifinals game into the finals like that? How does the CBA allow that to happen with no penalties?

There’s one more tidbit to this story. Watch the below video, which is the official Beijing TV recap of the game (the top-most video in this post was the day-after recap):

Notice anything missing? The two plays with the questionable fouls have been scrubbed. Think about that. The play that tied the game and the play that led to Shanxi’s winning free throws — all within the final minute — are not in BTV’s official highlight package. You think someone in the CBA office had a BTV producer’s ear?

The deciding game in the series, Game 5, is Wednesday night in Beijing. OH BY THE WAY, the last two times Beijing played at home vs. Shanxi — Games 2 and 3 of the series — Stephon Marbury scored 52 and 53 points. What’s the early line on how many he scores this time around?

23 Responses to “Stephon Marbury Has Been Accused Of Sending A Shanxi Fan To The Hospital; In Other News, Shanxi Should Be Stripped Of Its Basketball Team”