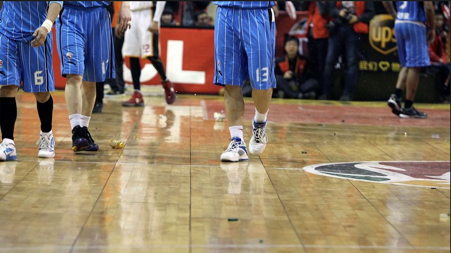 Some tickets for tonight’s deciding fifth game between Shanxi and Beijing are going for more than 10,000 yuan, according to CCTV’s courtside reporter. Security is at maximum. Don’t even think about taking in lighters, bottles or any miscellany that can be thrown (paraphrasing Stephon Marbury: Beijing is not Shanxi).

Join us for our live-blog of the game, which starts at 7:30 pm on BTV. Updates appear at the bottom.

Pregame: Every time I see a recap of Game 4, I get angry. Those refs fucking blew. Seriously. I’ve held back pretty well, all things considered, but holy shit they were garbage. As a result of their mammoth incompetence, the league is importing three foreign refs with zero CBA experience for tonight’s game, according to NiuBBall (Jon Pastuszek, lucky guy, is at the game). Yeah, that’s how awful those Game 4 refs were: the CBA doesn’t want today’s referees to be tainted by their durian-skunkweed-stinky-tofu-smegma reek.

Tipoff: CCTV-5 and BTV have the same feed of the game. We’re five games into this series and I’ve yet to make a comment about the immense ugliness of Shanxi’s uniforms. Alicia just said it’s the uniform of Scurvy.

Beijing, however, has Stephon Marbury, and he just scored Beijing’s first eight points. At this rate, he will score every single point for the Ducks.

It’s not just that he’s scoring all of Beijing’s points; it’s that no one else on the team should be allowed to take shots.

We asked last week if he could top his Games 2 and 3 performances of 52 and 53 points. Early signs point to yes.

Beijing’s Chen Lei just scored on a no-look flip in the lane, then Beijing hit a three to make it 23-11. The rout is on!

Moments later: the most audible “shabi” (stupid cunt) chant of the night.

Fucking Christ, Beijing has missed its last eight shots or so — within two possessions. Marbury just missed three in a row from the lane, then his teammate missed an open three-pointer.

It happens. Basketball is hard.

“They’re flailing like soccer players!” Sam laughed as Beijing grabbed a defensive rebound on the other end.

Marcus Williams may be a silky smooth player with length and skill, but he just got pickpocketed by Marbury who assisted on a dunk-and-one. Put that down, baby! Fuck yes!

But the Ducks still can’t score in the lane. Their last possession of the half: three misses at the bucket, then a missed three-pointer. Huh. Where have we seen that before?

Come back for the second quarter, in which we’ll see Randolph Morris, Beijing’s other foreigner, play against Shanxi’s Charles Gaines, an All-Star. 29-13 Beijing currently.

8:54 left in 2nd quarter: Charles Gaines just got T’ed up by the foreign ref, and holy shit he’s angry. His teammate tried to hold him back and he angrily brushed aside his arm. A close-up of his face causes Sam to say, “Dude he looks like he’s going to pop a cap in somebody’s ass.”

Beijing just missed three more shots at the bucket. I think this calls for a compilation video.

7:49 left in 2nd: Someone on Shanxi just got T’ed again, and it started with Gaines, who plowed into a defender and didn’t get the foul call he wanted. As Beijing went to take the free throws, someone on Shanxi’s bench went to console Gaines, who feigned an elbow jab to tell the guy to fuck off.

I’ve switched over to BTV, whose sound quality is much better.

Just under five minutes left, and Gaines just got away with taking about four and a half steps. Wow, zebras. It’s as if they’re refereeing a game between seven year-olds and decided to let the kid double dribble because everyone does it.

Everyone should be watching BTV’s telecast, which doesn’t cut to commercials. They put a camera right up to the head coaches in the huddles and you can hear their every word. It’s awesome.

In other news: Wang Zhizhi made the Chinese Olympic team. No word on who will replace him if he dies before the Olympics due to old age.

“It looks like he just got out of prison!” Sam says of Gaines. “They just released him for this game.” That’s Sam for you: saying what others want to.

Now Beijing is jacking up threes — making some, missing others. Sam, who is a Virginia alum (and fan), just compared them to Duke.

Meanwhile, the teams have stopped playing defense. This is fun to watch though.

Morris now has two straight rejections, the most recent into Beijing’s bench. In between those, you’ll never guess what he did… he missed a layup.

You remember when I wrote, “Well, here’s how you score at the rim: by dunking”? One of Beijing’s players, wide open at the basket, just tried a two-handed dunk… and missed.

The Ducks missed another shot at the bucket. Oh well. They’re up 55-38. HALFTIME.

The second half begins with Morris missing a shot, swinging his arms at his side in deep sulk, and staring at the baseline ref while nine other guys run down the court to play basketball.

If you didn’t know, the CBA limits the use of foreigners to six total quarters, which is why Marbury and Williams didn’t play any of the second quarter. But all four foreigners are on the court now. Shanxi scored the first seven points, and then Marbury made a driving layup to quell the run.

5:53 mark in 3rd: Beijing up 70-52 after Marbury’s slicing layup over Gaines, his 15th and 16th points. He followed that with a great drive-and-assist, then another assist to Morris. Man’s a superstar here.

Gaines ALMOST just got T’ed for the THIRD time this game. He sent down an absolutely monstrous one-handed jam with Marbury nearby, then extended his head near Marbury’s maw and jawed emphatically. The refs blew the whistle and discussed momentarily. Marbury made the “T” signal to ask whether it would be called. Gaines ran over to Marbury and embraced him with a smile, and Marbury couldn’t help but crack a grin as well.

HOLY SHIT! Marbury picked Gaines clean, dished backwards to Morris on the fast-break, then screened out Williams, who was defending the bucket. Morris then threw down a one-handed dunk in Williams’ face. Sam thought the ref initially seemed to signal a foul on Marbury, which actually would’ve been a good call, but ended up calling the conventional foul on the defender — WHO JUST GOT POSTERIZED (if I didn’t make that clear) — instead.

Williams took a pretty nasty spill after getting fouled near the bucket, but he appears alright. Marbury has 23 points.

The BTV commentators just made a great point: the refs are FIBA refs, but the CBA doesn’t use FIBA rules. The lane, for instance, is a also a rectangle, not a trapezoid. Interesting, eh?

After Morris let the ball slip out of his hand after a loose ball (he probably was fouled), Shanxi hit a three to cut the lead to 11 with about nine minutes left in the 3rd.

“Sloppy but entertaining,” Sam says about the CBA. “It’s like watching Jews play basketball. You know they’re not good but you like to watch them try.”

He can say that because he’s Jewish.

5:09 mark: timeout on the floor, Beijing is up 99-86. Shanxi has expended quite a bit of energy in their comeback, but Beijing seems uninterested in drowning this puppy.

They just showed a crowd shot, by the way. Two or three people wore Guoan green. Four wore white like Marbury asked them to. Everyone else was in black, as expected. (Although there are more white shirts inside the arena today than normal.)

Morris just missed twice underneath the basket without hitting the rim. After the first time, he got his own rebound. After the second time, the 24-second shot clock expired.

3:21 left in 4th: They’re chanting Marbury’s name — Ma-Bu-Li! — after his lastest drive-and-one. Beijing is getting ever-closer to the CBA finals, the BTV announcers point out. Only six teams have been to the CBA finals in the league’s 17-year history (Beijing never has), and only three – Bayi, Shanghai, Guangdong — have ever won.

2:27 left: Cheerleaders take the court, piquing Sam’s attention. We notice that their shirts read “I love CBA,” not Beijing.

Less than two minutes to go and Beijing is up 106-91. I think Bill James would say it’s over too.

The final minute: The crowd stands. The Ducks hit another open shot. Marbury pumps one fist while smiling wide. Gaines two-handed dunks. Marbury and Chen Lei embrace on the court as the game keeps going, but the clock has frozen at 15.9 seconds. Marbury is subbed off as the crowd chants: M-V-P!

The bench empties itself onto the court when the buzzer sounds. Marbury looks like he’s tearing up. Morris is pumped.

Beijing’s head coach, Min Lulei, is interviewed by BTV’s courtside reporter, who uses the word “we” to mean “Beijing Ducks.” She asks him what he told his team before the game.

“[Shanxi] has come with the intent to fight. We have to borrow from the Bayi team and have the intent of war,” he replied. “It’s like a war. We’re going to battle. That’s what I told them.”

The two commentators in the studio high-five. It’s the most awkward high-five in broadcasting history, I think.

Beijing will play its home games in the finals at Wukesong (i.e. the MasterCard Center).