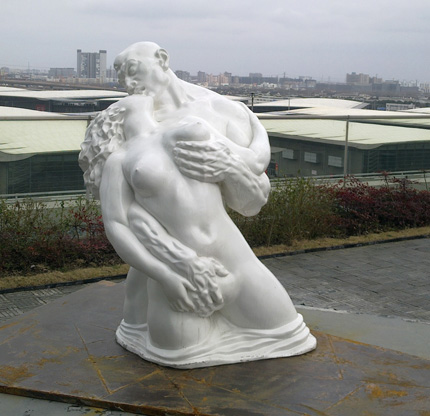 Ah who am I kidding, it totally is. Shanghai Daily reports:

SCULPTURES in a Pudong hotel that were covered up after being branded pornographic are going back on display – though with the most revealing given a lower profile.

The five artworks at the Jumeirah Himalayas Hotel Shanghai depict the naked figures of a muscular man and a full-figured woman kissing and embracing in different poses.

“People have different understandings of the artworks,” said Eve Zhou, a public relations official with the hotel. “Opinion is very subjective, but at least no one said they’re ugly!”

They’re called “I am Beauty,” by artist Geng Bo.

Note to the Shanghai Daily’s editors: I’m extremely happy to see you’ve taken my advice and gotten rid of your paywall, at least for the first link. The second link — see how I had to link to People’s Daily Online? It’s because no one can access your article, written by Liang Yiwen. He/she broke the story, right? Credit is deserved, though no one will give it because the story is behind a paywall. Are you listening, SCMP?

2 Responses to “This Is Not Pornographic”