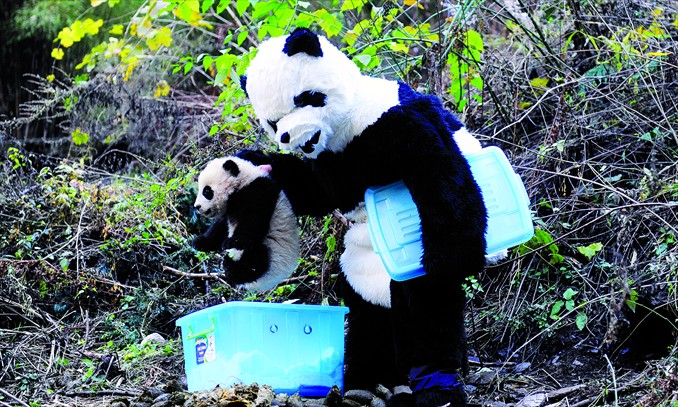 Giant pandas Gongzai and Yingying seem unusually excited. Gongzai wants Yingying to come down from the tree and he tugs and slaps his half-brother’s legs. They both fall on their fluffy bottoms and start wrestling in a ball of black-white fur. After the fun is over they walk away and begin to devour a huge bundle of bamboo that’s been dropped in their pen.

But the fun never really is over, is it? Yingying turns to his half-brother with a wicked glint in his eye. “Hey,” he says, the breath of his voice melting the distance between them. “Hey.” Gongzai glances up, hesitantly at first, but the penetrative power of Yingying’s gaze holds him steady even as his heart flutters.

Bamboo hangs from Gongzai’s lips, stuffed inside his cheeks, but he cannot swallow. His throat constricts. What is that booming inside him, gradually fading into a throb? Suddenly he recognizes three distinct smells: the savory sweetness of bamboo, the smoky wisp of incense, and the faint ambrosia of sweat. Each creates unique sensations that make him twitch, but together, the effect is devastating, hollowing out his insides to unveil an outcrop of hankering.

“But Yingying,” he begins to protest, though the failing of his voice suggests the struggle has been internal all this time, and even then he is losing like an addict who will inevitably cave to the confidence and power of an imagined, intoxicated self.

“Shhh,” Yingying says, rustling the straw underneath his fluffy bottom as he shifts his weight toward his half-brother.

Yingying is on all fours now, the brown of his eyes rippling with the water of desire, his snout so close as to be able to sniff the saliva of his partner growing warm, softening to a gentle uncoiling, a release into what is both pleasurable and unspeakable, shameful and sinful, half-brothers for crying out loud! These two will bend gravity to their will. A vertigo comes over him, makes his stomach curdle as if in flight, but he is on no precipice, as the saying goes — oh no, he is falling, falling, all faculties beyond his control, surrendered to the forces rifling his black-and-white fur before initiating the merciful sundering.