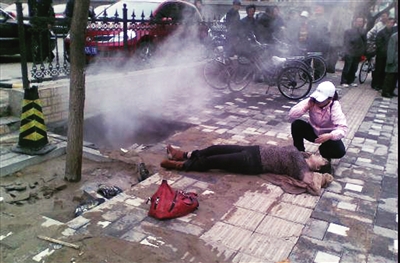 Shanghaiist has this report from yesterday, and it’s shocking.

A woman in Beijing is now in critical condition, with 90% of her skin deeply burned after she fell into hot water beneath the pavement when the road suddenly collapsed, according to Beijing News.

Remember when mothers or nannies (or New York City) would tell you not to step on grates because they might collapse? Did they mention that you would plunge into hot water and be boiled alive? This seems infinitely scarier than Stephen King’s horror story in which a spider-clown creature lived underground and ate kids. Because this is reality.

27-year-old white-collar worker Ms. Yang was returning to her office when the pavement suddenly caved in. The pipe beneath the pavement, which conveys hot water to a near-by building, happened to crack at the same time and water bursting out of the pipe almost submerged the victim.

Yang’s colleague, a woman surnamed Ma, who was walking with her when the accident happened, helped get her out together with a middle-aged male passerby. She told Beijing Times that by the time they managed to get Yang out, her skin and flesh were “almost separated.”

God. I can only compare this to video games to make it less real. Gears of War, for example. I think Gears of War 2, in which Dom and Fenix have to cross an abandoned factory to get to fuel tanks (or something), and the floor sometimes breaks underneath them — in exactly that perfect square pattern you see in the picture above — at which point they’re surrounded by spider-like creatures and devoured. Yeah, possibly that’s worse than getting trapped in a sinkhole of scalding water. Possibly.

The company responsible for the water pipe leakage, Wuhua Mansion, has offered 320,000 yuan toward the woman’s medical expenses. Judging by the article, though, they could be in for a lot more than 320K after they’re sued for millions for negligence.

4 Responses to “A Horrifying Tale Of Ground Collapsing Underneath Woman, Plunging Her Into Boiling Water”