Ed’s note: You might remember TAR as the guy around these parts who likes French people. He’ll be swinging by every weekend to fill you in on the week in Chinese media.

Tomb Sweeping Day is a yadayada bollockybollock from the reign of emperor Bull Wangle during the Hu Cares Dynasty in the Flerteenth Century. Apparently, people are doing whatever it is that people do on Tomb Sweeping Day online nowadays — which, from the cartoon in Global Times, we can assume is getting high and watching Karate Kid through Wolverine claws: 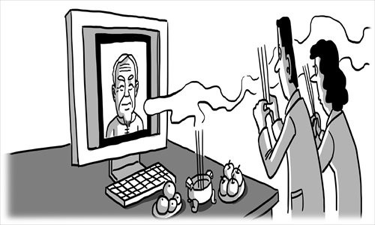 This is a perfect example of one of my least favorite things about Chinese media: repetition. I was able to find links to similar stories and editorials going back at least five years, written by people who are amazed that there are those who use technology to do stuff they really would rather not do in the first place.

Don’t believe me? Xinhua did one in 2009 with “More Chinese mourn online on traditional tomb-sweeping day” and again last year with “Chinese turn to greener tomb-sweeping for paying tribute to ancestors.” People’s Daily did the same story a year earlier, “Tomb-Sweeping Day goes green.” Here we have a problem with verbs. Had they gone green in 2010, there would have been no need to mention “going green” in 2011, would there? It’s not that difficult. Just look around the office and say, “Hey, Philip! Has Tomb Sweeping Day gone green?” He will tell you yes, because it has been in every fucking newspaper in the country for five years running. If this is the case, then it’s not news, is it? Here’s CRI banging on about it in 2007 with Commercialized Tomb-sweeping Day, around the time that Jack Kevorkian got out of jail.

Okay, so the Western media has its share of bullshit news as well. Hell, a Canadian news site had “paper iPad” sales for Tomb Sweeping Day. But at least it was incredulous bullshit, not “sweeping national change” bullshit.

I will bet cash this same editorial shows up next year. Think about that the next time someone says the word “progress” to you.

3. TV dramas can be more than love and swordplay Global Times | March 26

No they can’t. I’ve seen ’em. That’s about as good as they could possibly get. That said, the actual point of the editorial is sound, and I agree with it wholeheartedly. Chinese shows often invent magic potions and supernatural jargon to deal with their impossibly dim plots for impossibly dim people. My problem with the editorial is that it uses CSI and The Big Bang Theory as models.

The Big Bang Theory, fair enough, it’s a lowbrow comedy with a few physics ideas plucked from the 10th grade textbook, hated among nerds but possessing a certain shallow wit. But CSI? Really? Have you ever watched that show with anyone who has a tenuous grasp of either biological science or the legal system?

The show regularly ducks facts, makes camera footage magic and depicts police stations as spaceships. Here’s a scene directed by someone who has never been in a drunk tank before: 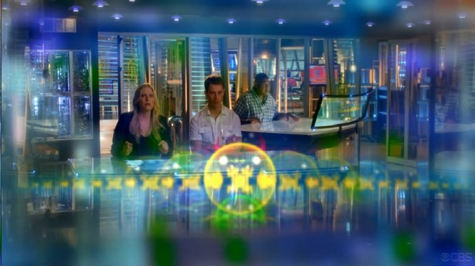 Drunk tanks and police stations in general look much more like this: 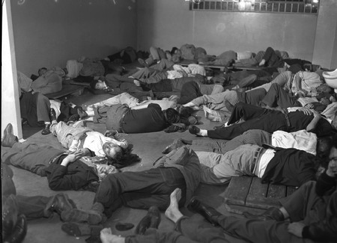 I don’t really like upsetting brainwashed people. It just seems cruel. But every once in a while these mouthpieces find some poor unsuspecting citizen from Zimbabwe or somewhere else suspiciously receiving preferential treatment from the PRC to do their daily American bashing for them. This time, China Daily has found a Canadian.

This story, much like the first on our list, has been done to death. Only this one is done about 150 times a year. Same figures, same feculence, same misunderstood and misunderstanding morons banging on about whatever idea crawled in their head that day to write headlines like, “Cabbage Policy Typical of Western Bias.”

Judging from what I’ve seen, the writer is simply a massive conspiracy theorist whose other brilliant articles include, “Google’s Deep CIA Connections” and “Censorship in the Western Media: What they Don’t Want You to Know.”

This time he makes the usual claims about America always taking shots at China about its human rights record. Which is untrue. Americans really don’t think about China unless they’re eating Chinese food or setting off fireworks. Even then, most just make slightly racist jokes about bad driving and kung fu.

The editorial is nothing special, the usual depressing hogwash and proof that we need alien overlords. Then why put it on my list?

Because here is the guy who wrote it: 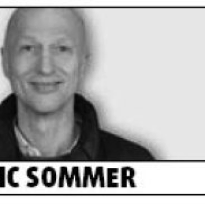 Look at him. Look at his stupid face. This is a self-proclaimed “CEO” of a company, which means he feels morally compelled to write to Chinese newspapers to help them shit on Western countries. Trust me, there are fields of people in Beijing who have one job: shit on the West every single day, in every newspaper, radio and television show. There are entire careers for Chinese journalists, commentators, TV and radio personalities and, of course, those lovely people from the Wu Mao brigade who make their living this way. Which makes you, Eric my boy, a scab.

According to sketchy information, he lives in Beijing as a “university teacher, software developer, organizer of workers and poor people, business person, and social science theorist, originally from Canada.” But then again, we only have this git’s word for it, so he may well be painting a feces Picasso under an overpass in Tasmania.

His business looks relatively sound and informing, all about capital and taxes and boredom, but then why do this? If I knew about wealth and taxes and tedious money-type stuff and used words like “market share,” I wouldn’t need to do this stupid bullshit to entertain myself. I’d be rubbing Fierro Roche all over my body and jumping in a bouncy castle.

Of course this massive shit-stirrer is entitled to his opinion. But whenever people spout off like this, whether I agree with them or not, I have to resist the urge to spit in their mouth while they’re talking.

Alas, I’m sure Eric Sommer’s probably a nice guy, your average expat in the big city with a typical cache of Mandarin and bon mots. Beijing’s expat community is small, so I’m sure we’ll run into each other sometime. I’ve done my bit for the propaganda rags too, mate. No hard feelings, eh?

1. 7 questions to the 14th Dalai Lama China Tibet Online (Ed’s note: the link is China Daily because the story can’t seem to be found on the the original site) | March 24

This is the one where they compared the Dalai Lama to a Nazi. It caused a bit of a stir. They also accused him of encouraging self-immolations, destroying Tibetan culture, having amnesia, being a feudal slave owner, being a traitor, and acting as an American stooge. That’s a pretty fair summary of a Nobel Peace Prize Winner if I ever saw one. Honestly, compared to some of the garbage published about him, this one is relatively tame. I’ve seen ones where they actually call him a “China rapist.”

The main line that got everyone in a tizzy was this: “The remarks of the Dalai Lama remind us of the uncontrolled and cruel Nazi during the Second World War. Behind the Dalai Lama’s concepts of ‘Middle Way Approach’ and ‘high-level autonomy’ is actually the idea of ethnic separation. How similar it is to the Holocaust committed by Hitler on the Jewish!”

On March 30, the “author” of this piece defended his claim, saying that this was nothing more than a “newest collection of your lies.”

He also stated, “I have historical facts and hard evidences. If you disagree, will you dare to come forward to debate with me?” For this, I fear for this man’s safety in the PRC. He has suggested, in one sentence, that there could be doubt in the fact of the Dalai Lama’s evilness, and that the party should hold debates, implying elections.

His only hope is for some human rights organization to help… oh, yeah. That’s right. He built a career out of pissing on them. So, I think I speak on behalf of Amnesty International when I say, “Go fuck yourself with a handful of nails.”

But really, big deal. For regular readers of Chinese editorials, this is barely worth mentioning. I didn’t even want to put this on the list, let alone at No. 1, but it meant I could do this: 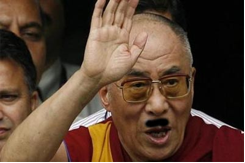 You know you thought it.

2 Responses to “To Serve People: BJC’s New Weekly Column In Which Chinese Media Is Taken To The Stocks”