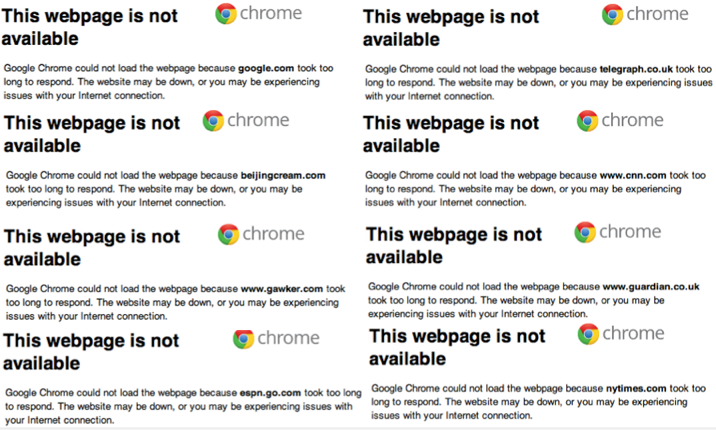 We mean “Western Internet,” of course, but considering 10 of the top 12 sites on Alexa are based in the West, it’s fair to wonder — as RFH did just now — “what the damage is economically by turning yourself into North Korea, Internet-wise.”

Check out the image above, a very short list of websites I tried to access just now without my VPN (I should note that my normal VPN connection failed earlier this morning, but I’m now on a custom gateway). News sites like the Telegraph — Neil Heywood’s hometown paper — and New York Times, Guardian, CNN are understandable targets at a sensitive time like this. Google.com we know hasn’t made friends with Chinese authorities. But ESPN.com? Gawker? Beijing Cream? Trust me, the list goes on and on. One can’t access anything, it seems.

Except — and here, I have to say that I wish this was a joke, that I were a mere troll fishing for a laugh — look what cockroach of a site crawled out of today’s Internet apocalypse, poking its dirty head into our brave new world:

Again, I wish this were a joke. But more likely, I think, this is confirmation of a somber truth: reality for those of us in China is the other side of the looking glass. We are trapped in a mirror, tapping at our reflections, dumb and deaf to the laughter of those on the outside of this godforsaken Panopticon. We are living inside a joke — a big, fat, smutty joke in which we can’t access news, we can’t access search engines except crappy Baidu, we can’t access our inboxes, we can’t blog or chat with friends, but we can freely stream videos of people having sex — Monica Santhiago all oil up… Gina Lynn very Hot Scene… The Fresh Prince of Beli-Air Porn Parody (pt. II)…

UPDATE, 12:51 pm: As we speak, Gmail — including gchat — is working again, as are a bunch of other sites that had previously failed to load. It appears someone in the Ministry of Censorship has realized that wiping the Internet in a country with 300 million online users wasn’t a good idea.

10 Responses to “Well, They’ve Done It: China Has Nuked The Internet [UPDATE]”