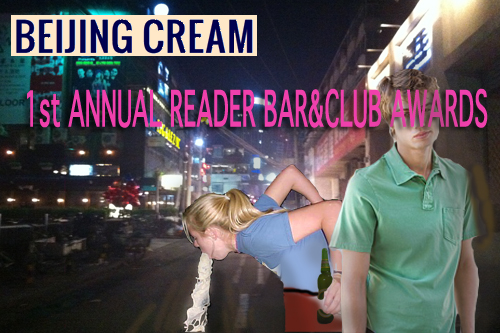 Ahh, the English Teacher, sometimes referred to as the LBH, or Loser Back Home. He comes to Beijing to “study Chinese” and “find himself” while he earns a bit of cash, but really just finds that 9,000 RMB a month can buy a lot of Tsingtaos and that a “gap year” can easily be parlayed into a “gap life.” Expat women often complain about how hard it is to find a man around here, but the truth is, no matter how hard up we are or how cold our bed may be, we’re probably not interested in you – and this totally works out because The English Teacher is often plastered before the end of Happy Hour and trying to put the moves on a local girl who, if she’s lucky, only half understands what’s going on.

Our prediction is that The Brick will easily take this category given not only its dearth of loyal English Teachers, but also the myriad thrice-divorced “businessman” types lurking about.

Best Place for Asian Men to Hit On White Girls

As expats, we all appreciate a bit of cultural exchange. However, the average foreign woman doesn’t appreciate a drunk Asian man who may be only something like middle-class rich offering up Chivas and green tea and pulling her down to his table at a gaudy night club. (A tip for the men that do these things: if you can afford to rent that giant bottle of Johnny Walker Red for the night, you can probably afford to take home one of the scantily clad ladies of the night that are milling about. They’re not free, but they’re probably more interested in your money than the average foreign woman you’re slobbering on. Also, don’t touch our boobs.)

This one is tough, and we think it’s going to be neck and neck between Xiu, home to the probably-richer-than-middle-class nouveau riche, and Vic’s, where dignity goes to die alongside students from the international high schools having the time of their lives. Vics may have the upper hand here as Xiu’s formerly infamous Ladies Night has lost steam and appeal since they cut off the free-flow vodka drinks.

Best Place for a Girl to Avoid Interaction with Men

We’re just going to say it: girl, if you’re going to a gay bar looking for a date, you deserve to go home alone for the rest of your life because your game is fucked. Do you really think you’re going to find someone who wants to hit on you at a place with the website www.bjdestination.com? Get real. These guys have got bigger, harder things on their minds than whether you even exist.

As for the places in this category that aren’t necessarily gay bars, your chances of pulling are just as slim, plus the coffee is over-priced and bad.

The gay bars are an obvious way to avoid male attention, and so is Bed Bar, but only because nobody really goes there. However, we think The Bookworm, which has been hailed as a great place to meet people in the past, will take this one, because the only time we’ve been approached there is to be asked if we could unplug our computer because, umm, my battery is running really low, thanks.

Our pick for this one has to be Kai Bar. We know a girl who has been drugged TWICE here, so that must be significant in calculating the odds of it happening to others. Kai Bar, you can move, but you’ll never change, you sleazy, grimy, urine-soaked so-and-so.

Piper sold her soul to the devil seven months ago, but that’s okay because he pays well. She currently lives in Beijing.

You can vote for the bars in the Dross category and the four others – Repugnance, Alcoholism, Meta, and Sex — right here:

6 Responses to “BJC Bar And Club Awards: A Closer Look At The “Dross” Category”