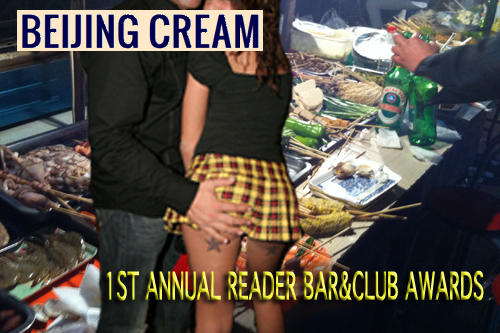 This category depends heavily on the reader. It is the Rorschach test of the Repugnance category. So, who do YOU hate the most? Do you despise hipsters or French people? You’re probably going to get in a conversation with a few at Cafe de la Poste. Hate show-offs and the nouveau riche? They’re in abundance at d lounge (remember, no capital letters in the name, as capital letters are for ugly poor people who work for a living). Hate cheap drunks and stoners? You’ll find them through that cloud of smoke and layer of vomit outside of Heaven. Hate people that call it “futbol” or people who can’t stop talking about that amazing time they had on their semester abroad or “gap yah”: yeah, that’s Paddy’s. Grown-up and not so grown-up frat boys and their international equivalents? Stumble Inn’s got them by the truckload.

But my best guess for this category is probably 1F, as it seems to attract the most diverse crowd. I personally found myself in a conversation with one delusional English teacher there that claimed he had made and lost a fortune and had a hit placed on him by the Chinese military. The night ended with us nearly coming to blows because for some reason I refused to pay for his tab of eight Diet Cokes and vodka.

Luckily all of these locations are within Second Ring Road, which is great since my damn Flying Pigeon bike broke for the 1000th time on my three-minute commute from my courtyard home I’m renting for 8,000 a month to buy wine and cheese at this cute little hutong spot you also haven’t heard of. No, my house doesn’t have heating, but I love the smell of carbon monoxide coming from the stove in the morning. Oh, you can’t smell it, you say? Maybe you’re just not as down-to-earth as I am. You just wouldn’t understand. Anyway, I’m too busy to give you an answer.

Most Likely to Make You Feel Like You Got Fleeced

So there are two “fleeced” categories here. I’ll assume this one includes nothing more than taking your money and laughing about it behind your back. It’s just business, nothing personal. Each of these venues have something positive going for it, so I’ll try to handicap these based on a standard internal feeling of being ripped off.

Aria has a great wine list, but like that kid in Hunan, you’re probably going to sell your kidney to get it. I guess that’s a fair deal if you’re the kind of person who loves wine and is willing to pay for it.

Atmosphere: I’ve been there once and once alone. Let’s face it, you go there on a clear day, when the view is cool and worth it. When it’s not clear, you may as well be drinking your 80-kuai beer in a bunker.

Centro: expensive drinks that are merely pricey due to its location in the Kerry Center. It’s expensive, but aware of it’s expensiveness. True knowledge is self-knowledge.

Face Bar: I haven’t been there, and from the looks of the website I probably don’t want to. I’m all for a nice drink, but when the ambiance is supposed to remind me of a place that serves cheaper drinks than in Beijing, I wouldn’t feel right shelling out the big bills to pay for it.

Q Bar: ah yes, Q Bar. Nothing like going to the top of a shitty hotel for some questionable cocktails. I’m going to put my money on this one winning based on the fact that this place has met my expectations once or twice (considering its price) while raising my ire much more often. If I’m going to pay 60 kuai for a martini it better not take 45 minutes to make and then leave me feeling like I just drank at Smugglers. The only thing worse for waiting for drinks here is waiting for that elevator. Also, considering more people in Beijing have probably been here than all the others on the list combined, I’d say Q Bar is a lock to win.

Most Likely to Make You Feel You Got Fleeced, Raped and Left for Dead

Apothecary: Sit down, shut up, and watch me make this cocktail. Oh, you wanted to talk? SHUT UP and watch me flex my biceps while I lick this tasting spoon that’s been in and out of my mouth all night. Your cocktail from 1856 tastes great, and lucky for you my oral herpes hasn’t been flaring up recently. Here’s your two-page bill, hope you had a lovely time looking at the rest of your party in silence.

d lounge: “Models and Bottles, baby!” This is what you might say in a hip New York lounge where you can get a high-quality bottle service and there are actually models. Here in Beijing, there’s neither. Paying $300 for bottle service in the US and Europe already seems ridiculous, so why would you want to do it here? Oh wait, I think I have an idea. You’re probably a rich immature kid who fell into some money who needs to show off that you’re not poor. Really, I’m not poor, how else can I pay $300 for a bottle of $25 liquor? Sadly, you end the night merely drunk. Your dick didn’t grow and you didn’t bed even one of those lower-rung girls who hung around you all night. Sorry.

Scarlett: I haven’t been here, but from what I’ve researched and heard from others, you’ll end the night with the same thing you get from most “European Tapas Bars” in Beijing: a big long bill and food poisoning.

Spark: “Ohhh yeah, this is it, I’m going out to the newest hottest dance bar in Beijing!” Three hours later you’re wondering if one can actually catch epilepsy. Luckily you’re so dazed from the light show that you don’t see all that money flowing out of your pockets.

Xiu: I think most people view Xiu the same way they used to view Suzy Wong’s: it’s the place you go if you want to wear your new Yashow-tailored form-fitting suit that you have to squeeze into. Here’s where you can really splash around your money and show who’s finally made it up to senior teacher at English First! With any luck at all you might even impress all those girls you know who go here for Ladies Night. Sadly, they ended the free drinks and what’s left are merely the high prices, long wait, and disappointment that you could have gotten without the taxi ride to the middle-of-nowhere Guomao.

My guess: It’s a battle for first between Xiu and d lounge.

E can afford to drink at each and every one of these establishments on a weekly — if not nightly — basis. In real life you’d think he’d be nicer than this.

You can vote for the bars in the Repugnance category and the four others – Dross, Alcoholism, Meta, and Sex — right here:

5 Responses to “BJC Bar And Club Awards: A Closer Look At The “Repugnance” Category”