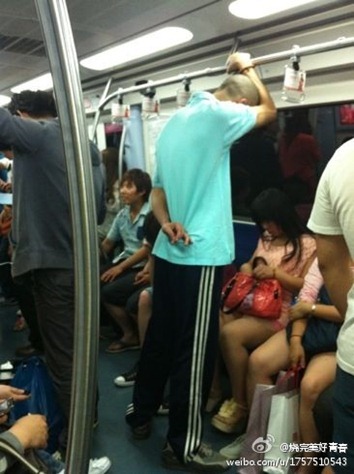 An update of the story earlier today of the man accused of sexually assaulting a Chinese girl in Beijing: There’s scant information that’s verifiable. For example, a photograph has been offered up on Weibo (above) that purports to show the same man – or at least a man wearing the same trousers and shoes – accompanied by the following wholly unsubstantiated claim: “我次傲，这个社会真是乱了套了，出这些外国贱货，地铁上公开对女性性骚扰，车厢里来回窜，直接用将近勃起的下体顶别人，完全不顾别人眼光，在我这个门这就骚扰了5个女的。最后直接站在那小姑娘的面前！！！(“I am at the subway station, fuck, this society is totally messed up. These foreign bitches sexually harass women on the subway; pushing his erection against them, totally disregard others. He just harassed 5 women. Finally, he just directly stood in front of that little girl.”)

The alleged “foreign rapist” – stress “alleged” – is currently in police custody. This doesn’t mean he has been charged with a crime. The police report the man was “drunk,” so, compounded with the beating he took, it might be a while before he can give a coherent statement. The police have confirmed that there was an altercation with a UK national on an extended L (tourist) visa and he is currently being questioned. Anything else, at the moment, is likely to be just rumor and conjecture. –RFH

12 Responses to “Foreigner Accused Of Rape Currently In Police Custody”

Leave a Reply to Johan Klutz