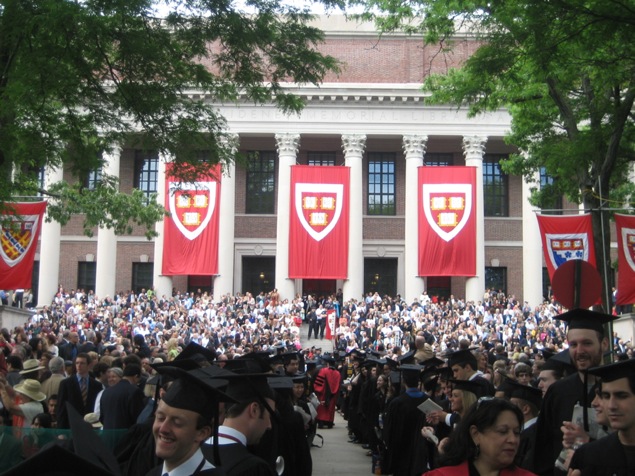 Last month, Bo Guagua brought some rather unwelcome attention to Harvard, managing in one fell swoop to both draw further ridicule to himself and to affirm every popular stereotype of Harvard students as arrogant, out-of-touch elitists. Perhaps unintentionally, he’s also drawn attention to an ongoing practice by Harvard of welcoming top leaders and their children — from China and other countries — to study. I refer you to today’s article in Slate titled “The East Is Crimson” — and I eagerly await, if I may say so, for Slate’s followups, “The East Is Columbia Blue” and “Oh Yeah, It’s Also Orange And Black.”

Harvard’s practice of accepting the leaders of tomorrow has been going on for at least over a decade, and was readily visible during my time as an undergraduate in the mid-2000s. I counted among my classmates the grandson of a former Chinese head of state and the son of the head of the Iraq’s Kurdish resistance movement during the Saddam years. (They kept low profiles.) I have no doubt that children of other foreign leaders were on campus but simply never entered my social circle. Certainly each of these students gained acceptance to Harvard on their own merits, and it’s not hard to see why Harvard would perceive these exceptional individuals as valuable additions to the school’s academic community. However, it’s worth bearing in mind that they also bring a very different set of expectations to campus with them. From their first day of class, they already possess the professional and personal relationships needed to ensure lofty careers once they exit the school. Certainly the Harvard degree is valuable for them, if only for the brand name, but they don’t have nearly as much to gain from it as your typical whitebread suburban student.

The princelings I knew at Harvard were incredibly smart and capable, but academics was often a decidedly secondary priority for them. Those that I knew were also busy pursuing side projects, or stayed involved with affairs back home, or were off racking up guanxi whenever the opportunity allowed. Sure, they went to class, sometimes; but usually just enough to make sure that the Harvard stamp of approval would be there waiting for them at the end of four years.

As embarrassing as Bo Guagua’s existence has become for everyone, I can’t imagine Harvard will suddenly start to resist the allure of opening its gates to the children of foreign leaders. However, even if Xi Jinping’s daughter — currently an undergraduate at Harvard — and the next crop of Chinese princelings manage to earn their Harvard pedigree with fewer drunk photos, Harvard still shouldn’t expect them to always integrate seamlessly into the community. Most of them have enough common sense and personal drive to spend their time in more productive ways than Bo Guagua does. But even if they show up to class, or stay out of the New York Times, they’ll certainly also be pursuing agendas of their own.

Our contributor is a Harvard alumnus currently working in Beijing.

6 Responses to “Slate Asks Why Harvard Is Training The Next Generation Of Chinese Communist Party Leaders. Answer: Why Not?”