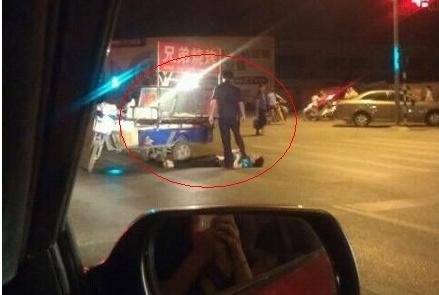 We’ve documented here that chengguan — China’s urban management/street enforcement officers — are not generally favored by the people. You might think it unfair to call them street thugs, but that’s the reputation they’ve built for themselves, and while some chengguan, surely, are decent, it’s unfortunate that it will almost always be the bad apples who make the news.

Take these three incidents from Nanjing on Tuesday.

We’ll start with the above picture, posted yesterday to Sina Weibo before being picked up by news media. According to most accounts, trouble escalated when a barbecue vendor pulled out a knife and began waving it at chengguan who, presumably, wanted him to vacate the premises. After a small scuffle, the chengguan subdued the man, and an officer stepped on his neck. Just at that instant, a passerby snapped a photo.

So how do the people view this incident? The officer was obviously acting in self-defense, right?

I’m going to cherry-pick a bit, but these three comments are all from the first page:

红胡子的老人0213: This is China’s specialty, no reason to be surprised.

时装_礼服: Using them [chengguan], we’re sure to take back the Huangyan Islands.

Of course, some netizens do point out that using a knife to resist law enforcement is probably not the best move. But the tone leans toward sympathy for the vendor. There is a sense that the weakest among us, society’s disenfranchised and voiceless, deserve better. It’s a sentiment that runs through the comment sections of many such stories here, often accompanied with anger. People don’t like to see others trampled upon, and fair or not, the image of a street merchant lying on the ground with a foot to his neck reinforces every negative perception of authority figures in this country.

According to Jiangsu News (video), the offending chengguan, surnamed Chen, has been suspended and docked bonus pay.

UPDATE, 10:58 am: chinaSMACK has now has this story too, with Fauna translating an article from NetEase where a chengguan tries to explain what happened: “The street vendor at the time was brandishing a knife and cut one of our men on their head. A fight broke out between the two, and during the struggle to wrest away the knife, the street vendor fell down. Our man lost his footing and accidentally stepped on that street cart vendor, the angle of which just happened to be photographed by a netizen passing by.” Gee. And chengguan still wonder why people don’t trust them, huh?

Then there was this:


Chengguan are seen beating up a student from the Nanjing Forestry University. You’ll have to take this Sina Weibo post with a grain of salt, but apparently this incident began when a student dared to intervene when he saw chengguan verbally abusing a street-food vendor. Four chengguan proceeded to chase the student and beat him, and that’s where the video picks up. While we can’t confirm the events preceding the video’s start, we do know what we can see and hear, and that’s a chengguan raving like a madman and threatening, “If I see you again, I’ll beat you again!”

These are, ostensibly, law enforcement officers we’re dealing with. What is the difference between a thug and a bully? Perhaps the thug’s sense of self-assurance, his aggression born out of arrogance instead of insecurity. You put a uniform on an angry, insecure, probably undereducated young man in China and tell him he now has power, well, you create a thug.

Finally, this was uploaded to Youku a day ago, a video titled, “Nanjing Nanhu chengguan beats people.” Just chengguan being chengguan, you might be tempted to say. In this country, that only means one thing: those SB assholes are at it again.