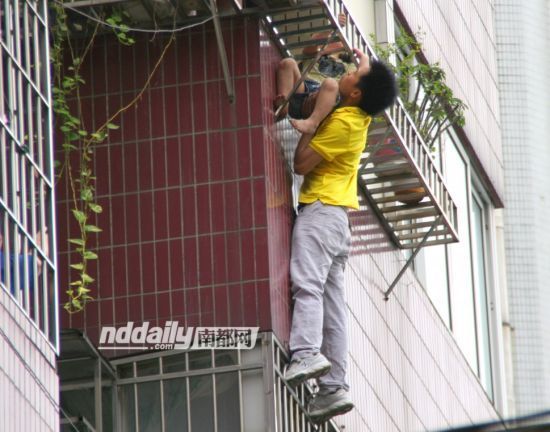 The anonymous man who rescued a young child last week from a fourth-floor balcony has been tracked down and rewarded 50,000 yuan and a job from the Guangzhou municipality. According to China Daily, which curated content from ycwb.com (assume [sic]‘s):

Zhou Chong, 23, rescued the little girl falling from the balcony on June 3, but left after she was safe. The local government ordered an all out effort to find him to promote his heroic deed.

Shi Qizhu, head of Tianhe district in Guangzhou, visited Zhou on Sunday, saying “Zhou saved a girl’s life and the family’s happiness regardless of his own safety. As a local government, we must never forget this.”

There’s no word yet about this man‘s reward — he also scaled the side of a building to rescue a young child from a high place — and below is a man climbing from the seventh story to rescue another child dangling from a railing. 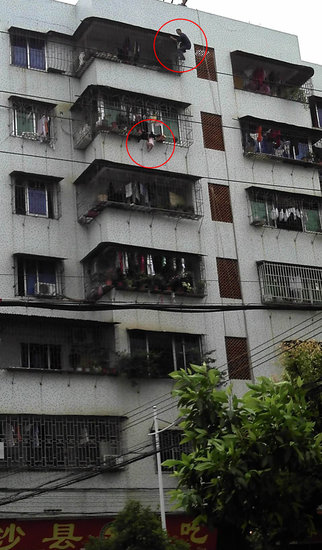 On that note — what’s going on here? I mean, in the apartment buildings of this country, occupied by parents with toddlers. When until — heavens forbid — a young child actually falls through? (Or is that not possible, and that’s some sort of cosmic point?) UPDATE, 5:38 pm: Ugh.

Guangzhou’s municipal government has set quite the precedent — will the governments of the other two places follow suit?

We’ll end on this from hero Zhou:

Zhou said he never thought his heroic act would earn his a reward and job offer. He added that he just did what was right and he was not scared of heights due to his working experiences as a welder.

2 Responses to “Man Who Rescued Child From Balcony Handsomely Rewarded”