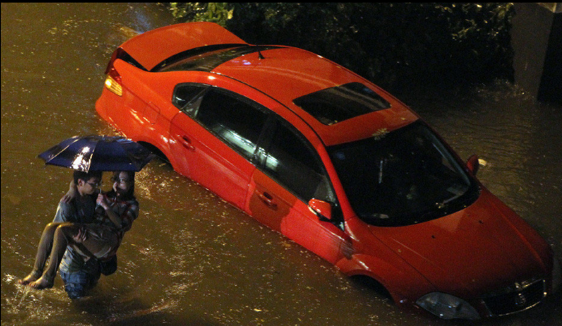 The publicized death toll for Saturday’s Beijing rainstorm was three, then four, then 10… and now 37 — and might will rise in the coming days. According China Daily, 25 drowned during the 20-hour storm, while others died of related causes. The municipal government estimates losses of at least 10 billion yuan. More than 50,000 people have been relocated, according to Xinhua, and at least 80,000 travelers were stranded at the airport, with 500 cancelled outbound flights. All in all, “average precipitation reached 170 mm citywide and the maximum exceeded 460 mm.”

As always, Sinocism has a terrific roundup of coverage, and several of the following links comes from Bill’s post.

Fangshan District was hardest hit — we have a video after the jump. Jinggang (as in Beijing-Hong Kong) Highway in that district was completely submerged, turning into a “river,” as netizens are calling it.

The expressway was still at a standstill Sunday afternoon, as the drainage system could not cope.

“The capital’s drainage network is already outdated, although a lot of repair work has been done to maintain it,” said Zhang Junfeng, founder of the non-government water resource watchdog Happy Water Journeys.

“The capital’s drainage system could be among the most advanced across the country, but it isn’t on a par with some developed countries, where the systems are designed according to a much higher standard,” said Dai Shenzhi, a professor at the College of Architecture and Urban Planning at Tongji University in Shanghai.

The conversation is slowly but surely beginning to turn critical. We’ve mentioned this before, but the city’s infrastructure, at least in parts, seems inadequate to handle these type of rainstorms. Netizens seem to agree, as reported by Wall Street Journal:

“Sewers are not a face-giving infrastructure project,” artist Li Yijia wrote in response to the images, repeating a sentiment widely expressed elsewhere on the site.

“Beijing’s glossy appearance can’t withstand the erosion of a bout of heavy rain,” wrote another Sina Weibo user. “In just a few hours, Beijing is washed back into the old days. The city government hasn’t stopped rebuilding this city, but they can’t even deal with getting waterlogged.”

The incident brought out some good in people, however (like these people pushing a police car), and it’s heartening to read these stories. Via Tea Leaf Nation:

In the face of disaster, Beijing citizens showed an exceptional capability for self-rescue and mutual support. Many passengers stuck on the streets reported that they were picked up by private cars for free. @江湖酒吧69 recounted on Sina Weibo: “Around 11 pm, I waited for a taxi in desperation for nearly an hour, until a private car picked me up. The driver drove me for free and also picked up a couple of disabled foreigners and another couple along the way. He told me he had already picked up 27 people, and would continue till 2 am.”

…Many said that they were moved by and proud of the love and bravery shown by citizens. Xu Xin (@徐昕), a legal scholar,comments: “I’m sleepless tonight thinking about the heavy rain, the lives lost, the injured people and the police’s rescue efforts; I’m also thinking about so many asking for help on Weibo, and so many offering their help. The spirit of Beijing is not reflected by grand, meaningless words but by the pictures of Beijing tonight. The carrier of the spirit is Weibo, on which energy of kindness is being paid forward. ”

Columnist Zhao Chu (@赵楚) believes that such mutual support forms the basis of a civil, democratic society. “When you see people voluntarily show love for others and extend a helping hand, you have a civil, modern society,” he wrote.

There were bad stories as well, of run-of-the-mill greed and callousness, which we won’t excerpt here.

For a few hours, police were going around ticketing cars abandoned on the streets — but the government wised up and announced that those who were ticketed won’t need to pay the fines. Baby steps of progress.

UPDATE, 1:12 pm: BBC also has a good roundup, including of this China Daily summary.