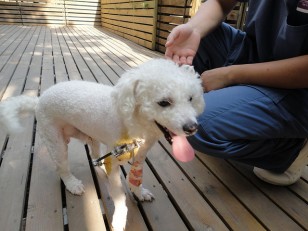 Earlier this month we wrote about a Bichon Frise that was tossed out of an 18th-story window in Beijing’s Xiandai SOHO because its owner was annoyed with it. Somehow, after landing on the windshield of a Honda, the dog survived. And now we’re happy to report — belatedly — that the little guy, named Lucky (of course), is in fact on its way to a full recovery — and a new home.

Lucky was initially brought to Doctors Beck and Stone, which has all the details of his incredible convalescence on its website. (Unfortunately there are no permalinks — each update is posted to the front page — so if you’re reading this in the far future and the story is no longer there, click on the link that appears at the bottom of this post.) Only four days after his fall, Lucky was outside walking and his skin infections had healed. The day after, August 11, he underwent surgery. In the final update, August 16, we learn that he got fitted with a carbon leg support rod and has since been moved back to Doctors Beck and Stone’s central business district hospital, where he was initially treated.

One final detail: the person who rescued Lucky — and who is adopting him — is pop star Huang Yong 黄勇. He’s been getting a lot of thumbs-up emoticons on Sina Weibo.

Apparently Doctors Beck and Stone undertook all costs of Lucky’s treatment. “Doctors Beck & Stone will not accept any donations; hence please do not present any donation at any of our hospitals,” it said in a statement. “Alternatively please contact animal welfare charity organizations for donations, such as China Small Animal Protection Association, Beijing Animal and Human Environment Education Center, Beijing Small Animal Protection Association, etc.”

Well done all around. 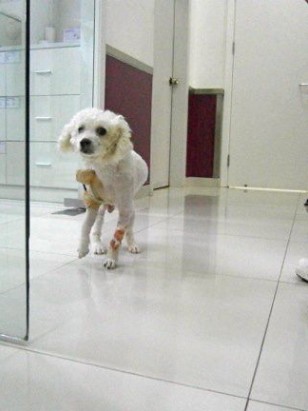 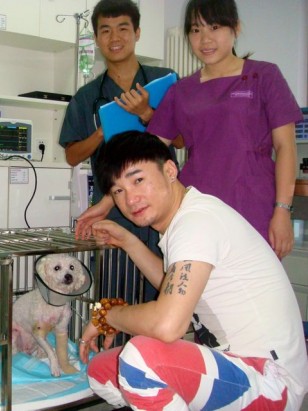 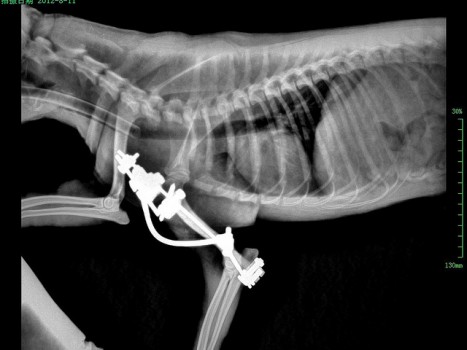 [The Saga of Lucky, as it first appears on Doctors Beck and Stone]

One Response to “Happy Ending For Lucky, The Dog That Survived An 18-Story Fall”