We’ve had our fun with this, now it’s time to drop the hammer. Earlier today, Wuhan Evening Paper reported that Zhengzhou’s now-infamous “filial pigs” — a mother and son in a pose suggestive of anything but filial piety — was in fact based off a statuette from a series called “Hooligan Pigs,” created 10 years ago, in which anthropomorphic swine were depicted having sex in a variety of positions. This particular statuette, if the price tag is to be believed, was worth 15 yuan, or $2.36. I’m sure someone could sell it for a lot more nowadays.

With this latest revelation, we don’t know how the stone sculpture in Zhengzhou can survive. There were children riding it, for crying out loud. And I think it’s safe to say the carving’s supporters will have to drop all pretense as to what it actually conveys. The sculptor plagiarized the statuette down to the exposed breast. You would think maybe he could have covered that up?

Wuhan Evening Paper’s photojournalist, Yu Zhiyong (@七点钟001), apparently discovered the above picture, and of course it’s now spreading across Sina Weibo. There are more smutty images of these indecent and fantastic hogs and sows after the jump. 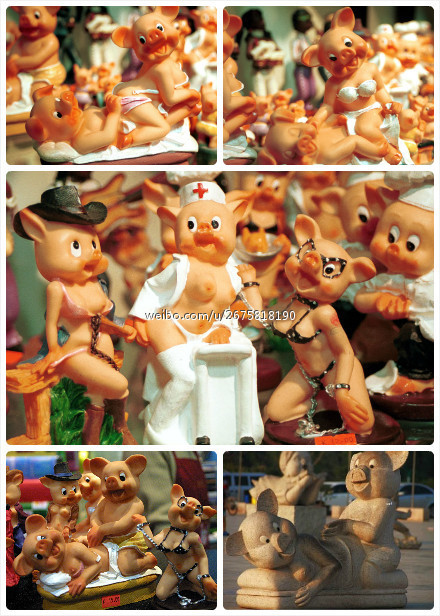