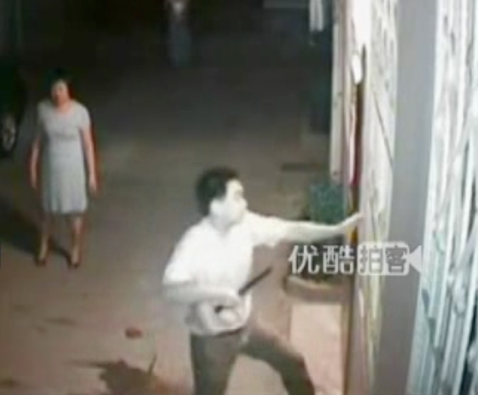 This is an update to our 2 am post about Lu Jianbo, the civil servant in Jiangsu province who attacked a woman with a knife on Friday night while reportedly shouting, “My family runs the public security bureau! Killing people is not a problem!” (“公安局是我家开的, 杀死人没问题!”)

The raw footage of the incident remains cleansed from Youku, where it first appeared, which is weird because news about the attack can be found in several other places. (Click here to see the original clip on Daily Motion — I was afraid to upload it to YouTube, whose moderators are vestal ninnies who haphazardly hand out “community warnings” for videos that are too “shocking”).

We’ve since learned that the woman attacked is Zang Hongmei, and that Lu Jianbo was so incensed because Zang’s mother allegedly hit Lu’s mother in the head with a brick. All this from Global Times, which has more details:

According to an initial investigation, Lu’s mother, surnamed Miao, became involved in an altercation with her neighbor, Zang, following a quarrel between the two around 7:30 pm inside the grounds of their apartment compound.

During the scuffle, Miao was allegedly hit on the head by a brick thrown by Zang. When Lu arrived home and saw his mother’s injuries, he grabbed a knife and attacked Zang, said police.

Zang suffered tendon and nerve damage in her left thumb during the attack and was taken to a nearby hospital for surgery.

Lu repeatedly shouted, “My family runs the public security bureau” during the attack, several eyewitnesses to the attack told the Beijing News.

Zang’s husband explained to local media that the neighbors Miao and Zang have had a long-standing dispute. “Lu’s family has taken over public green space and has been erecting illegal structures for a long time and many residents have called the mayor’s hotline to complain.”

People have latched on to the phrase “My family runs the Public Security Bureau.” Isolated from the context of an angry young man fighting for the honor of his mother, the words serve as a blunt reminder of the perceived arrogance of this country’s children of privilege. (Lu Jianbo’s father is Lu Shengmin, who Global Times says “is in charge of office management, finance and infrastructure work at the local public security bureau,” i.e. the deputy political commissar of the Jingjiang Public Security Bureau.) if Jianbo isn’t exactly a fu’erdai — second-generation rich — he’s the next best/worst thing: second-generation powerful. In other words, he will never win a public relations battle.

The comparisons to Li Gang were inevitable: you’ll remember “My dad is Li Gang” were the infamous words uttered by an intoxicated Li Qiming to security guards after he killed a Hebei University student with his car. The incident turned into a full-blown meme after censors failed to control the message, and the lesson was clear: there’s a lot of public discontent in China — with the rich, the powerful, the justice system, and, by extension, the government.

Which makes these type of stories so potentially volatile. It’ll be interesting to see where it goes from here, if anywhere. (“According to China’s Criminal Law, Lu could face intentional injury charges and a potential sentence ranging from six months to 10 years, Gao [Ming, a lawyer from the Shanghai Wanfang Law Firm, told the Global Times].”)

Will Lu’s mother, who has been illegally taking over public green space, be punished? Could she possibly, considering who her husband is? Of course, the family will spin the narrative so that she’s a victim in all this, the bullied old woman. Maybe it would have worked — that is, before the son went ahead and threw away his family’s only chance for garnering public sympathy. All it took were seven words.