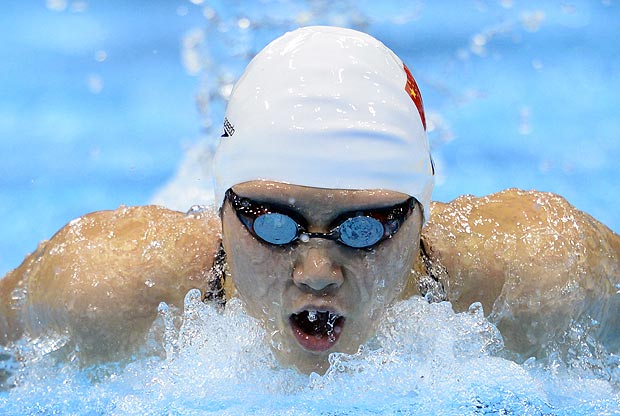 A Ye Shiwen ad on CCTV-5 preceded the race. Coming off the block in the fourth lane, she appeared to emerge from the water and break into the butterfly too early, but she was still in first place coming off the turn. She was barely in first after the backstroke, but slipped to third after the backstroke. It was quickly apparently, at the beginning of this final 50 meters, that she was going to win. We said in an earlier post that if she’s even close to the frontrunner headed into the final 50, it’s “over” — it’s her performance in the freestyle portion of the 400m IM, after all, that evoked suspicion of her “unbelievable” skills — how could a girl outperform a man in this final 50-meter split?

Turns out the reason is she’s damn good at it. Ye continued to pull ahead of Australia’s Alicia Coutts and never looked back, winning by six-tenths of a second. Her time of 2:07:57 was a new Olympic record, eclipsing the Olympic record she set yesterday in the preliminary heat.

In the post-swim interview, Ye revealed that she got up at 6 am but slept at 2 am, and that makes sense because whenever she sleeps late, she gets up early. She struck me as someone with the aplomb of a girl much, much older than 16. The only thing that gave away her age was the way she smiled before turning away from the reporter and the camera. It’s not something I can quite describe, not at 4 am anyway. The smile of a child champion and world-beater, perhaps. Congratulations to her, once again.

UPDATE, 4:05 am: With Sun Yang anchoring the 800-meter men’s freestyle relay, China won its first-ever men’s relay medal, a bronze, finishing behind the US and France. The team edged Germany by 0.29 seconds, with Sun Yang so tired afterward that he lay on his back for several moments on the edge of the pool, huffing.