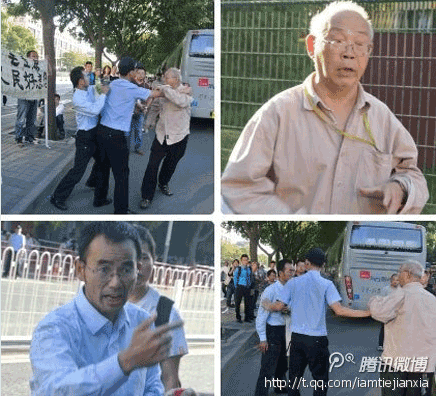 As exposed by @1798旅行者, the incident began Tuesday when an old man out for a walk took issue with the slogan, “Chairman Mao, we miss you.” He pointed out that it was unreasonable to pin desires for national dignity on Mao. A younger man who heard this strode up to the elder and slapped him twice across the face, accusing him of insulting Chairman Mao. Both began calling the other a traitor.

The next morning, netizens identified the younger man as Beijing University of Aeronautics and Astronautics professor Han Deqiang, a well known economist and better-known founder of Utopia, a Maoist organization whose website remains shut down since April (read about it here). (UPDATE, 11:52 am: Joel Martinsen in the comments has pointed out that Utopia is not only back up, but features Han’s self-written defense of his actions in an article titled, “Why did I strike this traitor?”)Judging by Han’s previous work, including a public lecture titled, “Save China by resisting the US: start preparing for war” — prompting comments such as, “China’s real No. 1 enemy is itself” — he would exactly be the type to shoot first and ask later, even if the target is an elderly man.

This post on Sina Weibo, published yesterday at 11:02 am, already has nearly 49,000 forwards and more than 23,000 comments. I’ve looked at a couple of pages and seen enough trash to make me support nuking comment sections. There’s all the predictable name-calling, with some saying traitors deserve to be killed on the spot. There are those who call Han a wolf in sheep’s clothing, while others voicing their support of him and his actions. @青哥儿 points out that, “Han dog only picks the weakest to fight, let’s see him try to fight a young person.” Yes, can we set a place and time to see Han get his ass kicked?

Alas, we understand how the powder keg of emotion, collective and individual, could have erupted in violence, forcing Han’s hand to strike an elderly man. On one side you had the anti-Japan protests, which brought together society’s more irrational elements and fooled individuals into believing that violence is condonable when the target is Japanese. On the other side you have a scholar inculcated with Maoist thought, which dictates slapping around even suspected roadie rightists is one’s patriotic duty.

Also, Han is a dipshit. Let’s not forget that. There’s your trump, outweighing Maoism or neoconservatism or nationalism or anything else. To slap a stranger for expressing an opinion, you just have to be a real piece of shit. So, yeah. We eagerly await this “public intellectual’s” comeuppance.