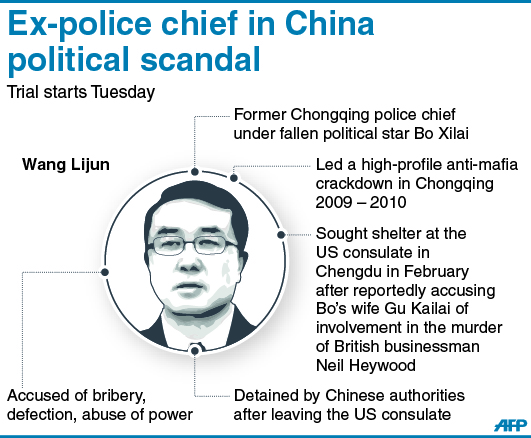 Wang Lijun, who will forevermore be known as “flamboyant” in Western media, was sentenced to 15 years in prison today on four counts, “defection” probably being the gravest. That he did not get a more severe sentence is interesting, and bodes unwell for his one-time comrade Bo Xilai, with whom he will always be linked.

Before we shift the attention to Bo though — a colorful character in his own right — let us linger a bit on Wang’s life and career, as documented in this Reuters article. China will never let a domestic filmmaker touch this subject, which is too bad. The script almost writes itself:

Wang had a rather unique upbringing:

Wang, an ethnic Mongol, boxed as a teen, served in the People’s Liberation Army for three years and worked as a forestry official before becoming a policeman in 1984.

Setting the foundations for early success:

His crime crackdown in the northeast town of Tieling won him national acclaim. Zhou Lijun, a screenwriter, spent 10 days with Wang in Tieling in 1996 while working on a screenplay for a TV series about his exploits called “Iron Blooded Police Spirits”.

According to Zhou’s account in a Chinese newspaper, Wang had a flair for the dramatic. He would drive to crime scenes in a Mitsubishi jeep modified to carry a double rack of lights on its roof so the locals would know “Chief Wang” was on the case.

He absolutely is a screenwriter’s best friend:

On arrival, he would leap atop the car, draw his gun and fire shots in the air. On a night raid of hair salons thought to be fronts for prostitution, Wang rushed into one and threw a young man with dyed yellow hair to the ground.

After a police search for evidence yielded nothing, he told them to take the youth to the police station, saying: “A man with hair like that can’t be any good”.

With success, his ego expanded, and his eccentricities blossomed:

Sources said he sometimes did his own post mortems, boasted of being an FBI agent under an exchange program and of being kidnapped by the Italian mafia.

He had… interesting demands.

He also demanded continuous supplies of fresh flowers and towels, said another source with access to city officials.

But above all else, he was a detective at heart:

Late last year, problems with the Heywood case surfaced. Wang learnt that some of his officers were refusing to sign off on the police report, which said he had died of natural causes.

By January, Wang had set up one of the special case teams that had come to symbolize Chongqing’s successes — and excesses — over the years.

And that, unfortunately, would be his undoing:

Initially, sources have said, the politician reacted angrily but agreed to a police probe of Gu’s role in the murder.

However, the next morning Bo rebuked his police chief and slapped him in the face, according to the official version.

Leading to one final, climactic, dead-of-night sprint for law, justice, and freedom…

Wang later made his run to the U.S. consulate in Chengdu where he told U.S. diplomats about the Heywood case, according to the British government which was briefed on this episode.

…before his epiphany, suffered in the darkness of a “free nation’s” embassy, that such values could betray him as easily as he betrayed his friends, colleagues, and countrymen.

The entire article is worth a read if you get a chance. The closing scene?

“That night, all of the restaurants and karaoke parlors in Chongqing were full — and mostly with police officers.”

3 Responses to “Wang Lijun Sentenced To 15 Years In Prison, Might Be The Most Interesting Man In China”