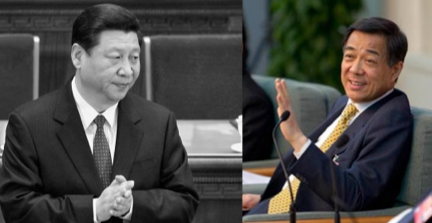 Two huge announcements from Xinhua this evening — concerning two men who are more or less intricately tied – impeccably timed for just the moment when everyone’s preparing to start their holiday and stop caring about news. First:

Bo Xilai has been expelled from the Communist Party of China (CPC) and his public office, according to a decision made at a meeting of the Political Bureau of the CPC Central Committee on Friday.

He faces multiple criminal charges, including violation of “Party disciplines” as mayor of Dalian and taking “advantage of his office to seek profits for others and received huge bribes personally and through his family.” Xinhua also notes that he had “improper sexual relations with a number of women,” and, “The investigation also found clues to his suspected involvement in other crimes.” Ominously, it adds: “Bo’s behaviors have brought serious consequences, badly undermined the reputation of the Party and the country, created very negative impact at home and abroad and significantly damaged the cause of the Party and people.”

The 18th National Congress of the Communist Party of China (CPC) is proposed to convene on Nov. 8 in Beijing.

Xi Jinping is expected to be announced as the next leader of China. Anything short of that, and you won’t be able to invent a holiday important enough to keep people from paying attention.

Of course, we’ll keep you updated here at BJC. Let’s just say we have some plans falling into place for National Congress coverage. Stay tuned.

Or don’t. Go enjoy Golden Week, folks. We’ll be around when you return.