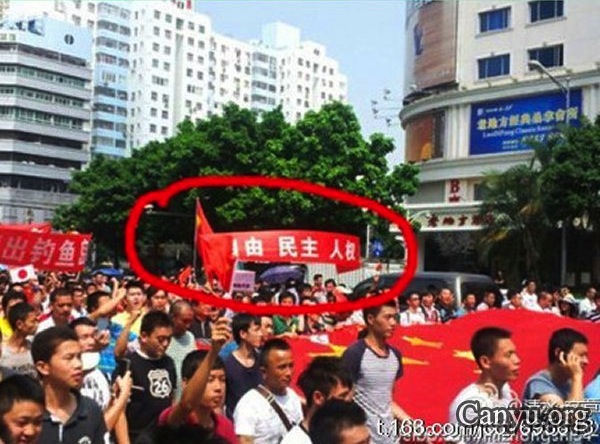 Global Voices reports that according to the Chinese NGO Canyu, “three human rights activists were arrested in September 16, 2012, during the anti-Japan protest.” Quoting a translated Canyu post:

(Canyu’s news brief on 16 September 2012) This morning, the grand anti-Japan rally took place in the Shenzhen downtown area, around Huaqiang North and Citizen Center. Shenzhen democrats such as Jiang Weidong, Ziyuan, took the chance to express their aspiration for freedom, democracy and human rights. They joined the rally, holding a banner with words: Freedom, Democracy, Human Rights and Constitutional Rule. They were discovered by undercover security police and arrested at around 1 p.m. They have been out of contact since then. Their phones are disconnected.

The offending banner read, “Freedom – Democracy – Human Rights – Constitutionalism.” It neglected to say “Fuck Japan.” I think if it said Fuck Japan, we could’ve ignored all those other terrible things that banner advocates.

We now have a serious answer to my sarcastic question in our previous post. Free speech? No.

4 Responses to “You Can Protest The Diaoyu Islands All You Want, But Hell No To Democracy”