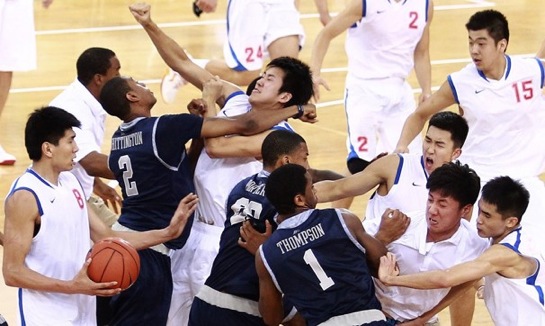 The Bayi Rockets are the crown franchise of the Chinese Basketball Association, not because they’re good — they won 31 percent of their games last year — or particularly likable — as Jim Yardley wrote in Grantland after Bayi brawled with Georgetown last year, “Anti-Bayi sentiment [at one time] was so deep that rumors began to circulate of counter conspiracies in which other teams were colluding, deliberately throwing key games, just to try to keep Bayi out of the playoffs.” No, Bayi is important to the government-owned CBA because it represents the Chinese People’s Liberation Army. And for the upcoming CBA season, it will be playing, literally, under different rules.

In what’s being called “The Bayi Rule” by some in the media, the CBA has enacted new special import regulations this season, the most important of which will aim to even the playing field for the all-Chinese Rockets: Against Bayi, teams are only allowed to play their foreign players — Asian imports included — five combined quarters. In the fourth quarter, only one import player can take the court.

In addition, teams who qualify for Asian imports (the teams who finished in the bottom four last season) have the option of bypassing a third Asian import all together and play their regular two imports seven quarters instead of the regular six. Currently, Tianjin, Shandong and Foshan all have third Asian imports, whereas Jiangsu is still making up their mind.

The reason for the rule, in the short-term, is pretty straightforward, as Pastuszek puts it: “Give Bayi a better chance at winning some games this season.”

The fact that this increase in win probability for Bayi can only be accomplished if the league arbitrarily imposes restrictions on every other team in the league doesn’t seem to bother the decision-makers. Screw the rest of ’em, right? Beijing and Shanghai and Guangdong and Shanxi and Qingdao et. al are just basketball teams, after all, not symbols of a rising country’s military strength. (Let us pause here to acknowledge that Bayi was the team whose professional basketball players brawled with American college kids in Beijing last year.)

To every fan of the CBA — every supporter who wants to see this basketball league make the slow climb toward legitimacy — the Bayi Rule is a slap in the face. As if we didn’t already think Bayi got preferential treatment, and didn’t already know, more or less, that refs in the CBA are crooked and given to fixing games, now we have to rationalize overt preferential treatment from the league office. I wonder how Tracy McGrady, who just signed on, feels about this. I wonder a little less why Allen Iverson still hasn’t signed with a Chinese team. Why would anyone endure a league that pulls this shit?

The Rockets don’t sign foreigners because they represent the PLA, which is a fine little principle they stand by, but why punish others for it? Why force the CBA, through political maneuvering, to acknowledge the uncomfortable political reality of their very existence? We thought the 2008 Olympics taught us, if anything, that sports should be divorced from politics. (Stifled laughter.)

This episode once again demonstrates that China is a place where personal connections trump every other factor for success. As long as the government continues to operate the CBA, Bayi will receive preferential treatment. If that makes the league seem like a farce, well, that’s just China for you, where powerful individuals operate under self-interest with little regard for the greater good.

By the way — our early guess is that Bayi improves on its 10-22 record last year to win 12 games. Place your over/under bets in the comments section below.