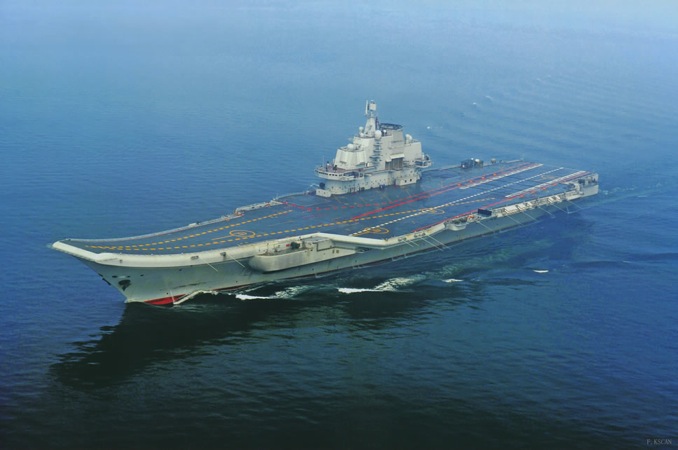 The article kicks off in true PD fashion, with a title befitting an elementary student who’s been told to shut up and stop showing off his new toy:

The article attempts to downplay the importance of China finally officially handing over the carrier to the People’s Liberation Army Navy:

Well, yes and no. On the one hand, when Chinluck (Holding) Co. Ltd. purchased the ship for use as a hotel from Ukraine in 1998, it was unfinished, stripped down, and rotting in the shipyard. It had no engine, no rudders, and no operating systems. Now that it’s seaworthy and commissioned, the Liaoning shares roughly the same specifications as most of the other carriers in the world that aren’t owned by US or France (theirs are nuclear powered), except there’s no indication that everything on Liaoning is working properly. It is currently being used as a training platform in the Bohai Gulf and as yet does not host any fixed-wing aircraft.

On the other hand, its a fucking Aircraft Carrier. Of the 153 countries in the world with any measure of coastline, only 10 countries can boast having such a thing. In this respect the Liaoning is special indeed. Operational carriers serve as key bargaining chips in asymmetric warfare and allow for fast, precise, and overwhelming projection of force when used in theater. To downplay it as “nothing special” is a gross understatement — nay, an irresponsible understatement, despite its current role and humble beginnings.

Why exactly are carriers so important? How can they tip the scales during a conflict? The answer lies in force projection. To understand this you need to have a basic understanding of the fighter planes that are used on carriers, their combat roles, and their limitations. If you’re a Westerner reading this, you’ve probably already seen the film Top Gun. If not, step away from this article for 90 minutes, go watch it and come back. No, it’s cool, I’ll wait.

OK, are you back? Did you enjoy young Tom Cruise before he went batshit insane? More importantly, did you enjoy those dogfights? Great! I like them too! Too bad they’re a far cry from the reality of carrier-based fighter missions.

Dogfights are actually extremely rare. Fighter pilots still train intensely for them to be prepared if they ever actually have to be in one, but dogfights are all but a thing of the past. The last time any US fighter was involved in a wartime air-to-air engagement was during the Bosnian-Serbian conflict in the late ’90s. The last time there was hostile engagement between any two fighters was in 2006 between Greek and Turkish F16s.

Most fighter missions from carriers (during an actual conflict) are either threat deterrent for the carrier group, patrols, or strategic bombing runs. During a conflict, a carrier group will post itself in international waters (recognized as 12 nautical miles off the coast of any country) and launch its fighters into enemy airspace. Bombing runs usually target a country’s infrastructure. Targets generally include bridges, airstrips, military factories, strategic geographic choke points, etc.

And here we get to why carriers are so crucial. As a pilot, unless you’re flying a B-2, you’re probably not going to fly a bombing run that launches from your own country. Jets have a very limited range. This goes double when you begin to consider how much fuel is consumed by the sheer weight of ammunition. Placing an aircraft on a carrier effectively extends the range of the jets by thousands of nautical miles (nmi).

The Liaoning has a range of 3,850 nmi (7,130 kilometers/4,430 miles) and can last about 45 days at sea before needing to refresh supplies. This of course can be extended to more than 1,000 nmi with aerial refueling. China has announced that Liaoning will carry J-15s, which are an indigenously produced variant of the Russian Su-33. These have a shorter range than the Hornet*, the jet of choice on US Nimitz class carriers (FA-18 Hornets have a combat radius of roughly 400 nmi, or 460 mi/740 km; the Nimitz carriers, because they’re nuclear powered, basically have unlimited range).

*This is due to a combination of the amount of thrust required for the ramp launch used on carriers like Liaoning and the weight of the plane itself (20 tons empty and unarmed). Because of the fuel consumption/weight issues, these planes also carry a smaller payload than other carrier-launched aircraft. China and Russia also lack the level of aerial refueling capabilities that the US enjoys and as a result the range of these jets remains limited to whatever fuel they were given before take-off (more fun facts here).

The Liaoning will also be home to two types of helicopters, the Russian KA-31 and the Changhe Z-8. China already employs the KA-31 on its Sovremenny Class Destroyers, and the Z-8 on a number of its Frigates. Both are multifunctional aircraft, but are commonly used for anti-submarine warfare.

In other words, the carrier upgrades China’s military capabilities by untold factors. But it also serves another purpose.

In peacetime, carriers frequently serve as diplomatic tools. A carrier group parked off a country’s coast when tensions flare during negotiations is the ultimate expression of Teddy Roosevelt’s “Big Stick” policy. Carrier groups are the Samuel L. Jacksons of the seas, reminding everyone that, “We’re going to be cool like Fonzie.”

The Liaoning isn’t at that stage yet; it’s more of a Tito, serving as a training vessel for two other carriers that are reportedly under construction at the Dalian shipyard and expected to launch around 2015.

When China finally does field a carrier for practical use, expect it to be used primarily as a deterrent in territorial disputes. China may have the third largest navy in the world, but due to fuel and other resource limitations, it remains a fairly liminal force. It will be much longer before China has the capability of deploying its navy far outside of territorial waters. Aircraft carriers are very vulnerable and require escort from multiple ships at once if they wish to survive an altercation. Presently, China may have enough ships to form one carrier group, but to do so would mean pulling very important ships away from where they are needed most.

Anyway, back to People’s Daily, which continues with the usual litany of attempts at underhanded jabs at Western nations:

Although China has become a military powerhouse, it will never bully the weak. Certain countries that like to bully the weak have absolutely no right to make irresponsible remarks about China’s aircraft carrier.

Despite the article’s downplay of Liaoning’s importance, and it’s threadbare attempts to paint China as the continuous whipping boy of Western bullies, I can’t help but think that the most vulgar sin of the article is this:

Chinese navy’s escort mission in Somalia waters over the years has fully proved that it is a brave and responsible country.

I will not decry, deny, or otherwise belittle PLAN’s involvement in UN missions to the Gulf of Aden. But for People’s Daily to say that this fully proves China to be a brave and responsible country completely disregards the fact that China has provided a steady flow of small arms to African nations such as Sudan, which have trickled down to Darfur and other conflict regions. Given the prevalence of Chinese weaponry in Africa, it stands to reason that many of the arms carried by the Somali pirates that China has been so bravely and responsibly thwarting were very likely obtained as a result of China’s very irresponsible actions of shipping such armaments.

The article ends with a few statements of China’s intent for the future:

China will change neither the regional strategic balance nor its strategic intentions and development road though it has an aircraft carrier.

China has the third largest Navy in the world, and while the addition of Liaoning hasn’t changed that, it certainly has marked a change in the region’s strategic balance.

As for not changing its strategic intentions or development road: to that, I have no doubt — whatever they might be.

Pyrrhic Victor is a former US military linguist whose specialty was Mandarin and Chinese military affairs. After he discovered that he could not become an atheist chaplain, he did his four years and got out.

4 Responses to “More Tito Than Samuel L.: A Military Specialist Weighs In On China’s First Aircraft Carrier, The Liaoning”