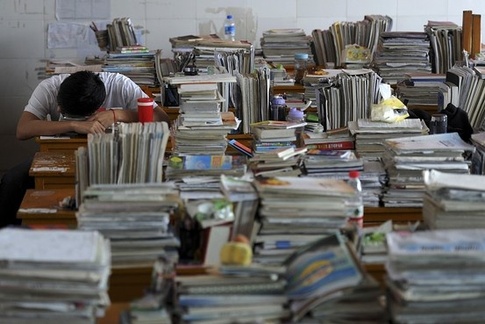 It’s every student’s worst nightmare: sitting in the most important test of your life, you’re told out of the blue that time’s up. You look at your sheet and realize that 13 questions remain unanswered. Impossible, you think, because you have taken a million practice tests and you know exactly how much time it takes to complete one of these. “Teacher, I think we have more time,” you protest, though to no avail. No one around you is getting preferential treatment, so why should you? The timekeeper has rung the bell!

Something like this happened in central China this year, and as it turns out — the timekeeper did ring the bell early! The test was the gaokao, aka the National College Entrance Exam, only the most important test in a student’s life. Without recourse, 1,050 students handed their papers four minutes and 48 seconds early.

This one timekeeping mistake may cost the proctor one year of his life, which he will be spending in prison. Reuters reports:

The incident lead to thousands of students and parents gathering “multiple times” at the school and the local education bureau to demand that the government investigate, it said.

A court sentenced Xiao to one year in jail for negligence, Xinhua said.

The sentence, however, is likely to only be symbolic.

However, he was also given a one-year reprieve, Xinhua said, which means he may serve either very little or no time inside.

“Xiao was careless in his work and mistakenly rang the bell too early, resulting in adverse social impact,” the report added, citing a court statement.

But the point has been delivered, loud and clear: don’t ring the bell early. Too much is on the line for the kids and their immediate and future families to tolerate such a boneheaded mistake from one careless adult.