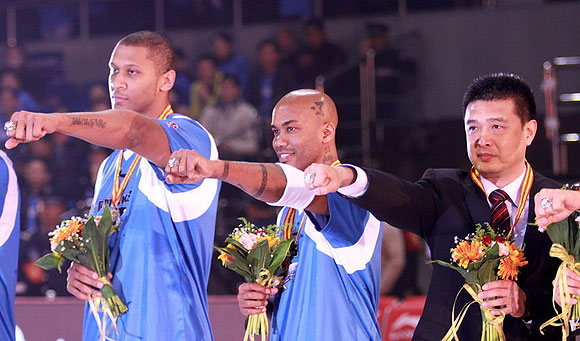 Before Beijing and Shanghai tipped off the 2012-13 Chinese Basketball Association season last night, there was a 30-minute pre-game ceremony in which players and coaches from last year’s championship-winning team — that would be the Beijing Ducks, if you’re just joining in — received medals, awards, and a championship banner. All that was normal. Then there was music in the form of Chinese folk rock, half-rapped, half-sung in Old Beijing dialect, with electric guitars, a pipa, and erhu. As background, there were caged birds, a costumed Peking Opera player, and candied hawthorns. Following that, a man and woman took center court and sang amid a flag team, with more Peking Opera players. Near the end, the man and woman began screaming like Fergie at the Super Bowl while CCTV-5′s commentators talked over them, reminiscing over last season. The crowd sat on their hands. Yes, it was weird.

To give you an idea of how the game went — a 94-78 victory for Beijing that didn’t feel that close — let me recap for you Shanghai’s first five possessions after winning the tip:

Coming out of a timeout with his team down 10-2, Arenas decided to do something. The first shot of his CBA career, naturally, would be a fallaway three-pointer, and of course he’d nail it.

That would be the last shot he’d take all game.

Just after six minutes had elapsed, Arenas would come up limp on the offensive end. He’d try to play defense, but the announcers immediately noticed something was wrong. He then exited the game, and eventually left the bench area. When he returned to the bench in the second half, he gave no indication of being able to play again, and he didn’t. No one was sadder for his departure, we’re sure, than his backcourt mate, National Teamer Liu Wei, who finished with a crummy line of 13 points, 2 assists, 5 turnovers.

It turns out Arenas strained his groin. The extent of the injury is unknown at the moment, but as mentioned, he played one possession on that injury, then took a seat and made no indication that he wanted to play more. We should note again that, as mentioned, the game was pretty much over within three minutes. (UPDATE, 11/26, 10:54 am: Here’s video of all 6 minutes, 10 seconds that Gilbert Arenas was on the court.)

The Ducks were on fire from long range in the early-going. They would shoot 7 for 11 from behind the arc in the first quarter to build a 29-13 lead. After the 3rd quarter, they led 81-56. Only after they stopped caring did Shanghai make it respectable, eventually losing by only 16.

Stephon Marbury didn’t show any lingering effects from his offseason ankle surgery. He didn’t penetrate as much as we’re used to seeing, but then again, his team was leading comfortably the entire game. He played 32 minutes and scored 16 with 8 assists, a number that would surely be higher if some of his teammates only knew how to finish at the basket. The Ducks’ biggest weakness last year — converting layups — was definitely a problem in the season opener, but it didn’t matter as much because they made 12 three-pointers on 26 attempts.

We’ll keep an eye on Arenas news for you. It’d be a shame if he missed any extended time considering how much more fun the league is with him competing. 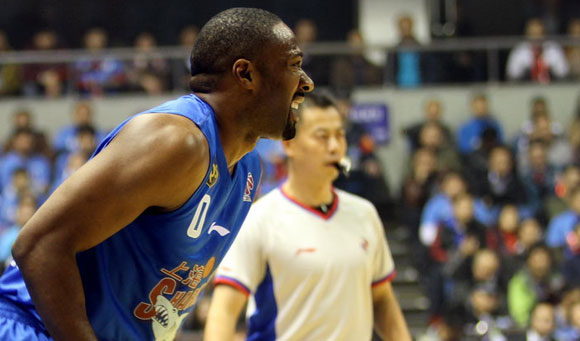 1. When a ball was knocked out of bounds at midcourt and the ref, staring at the play, thought Beijing’s player simply threw the rock five feet wide of his target for no reason at all.

2. An and-1 that was given in the third when, after the foul, which occurred on a pass, Shanghai’s player brought the ball down, turned, and then dunked. That’s about as lenient an interpretation of “continuation” as I’ve seen.