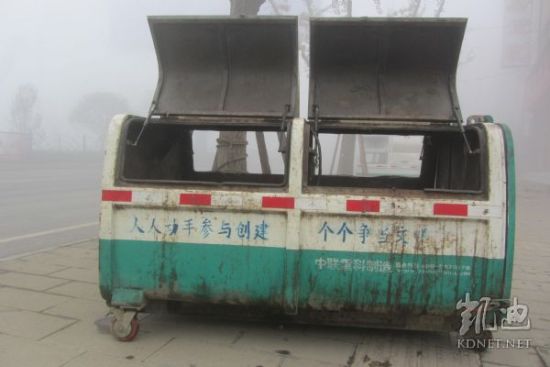 A really sad story out of Bijie, Guizhou province: on Friday, five young children were found dead in a dumpster, apparently of carbon monoxide poisoning. Xinhua reports that “the boys were suspected to have suffocated as they tried to sleep in the dumpster to survive the cold night” — temperatures were around 6 degrees Celsius, with rain.

They rubbed the whole bundle of matched quickly against the trash bin wall, for they wanted to be quite sure of keeping their dreams stay. And the matches gave such a brilliant light that it was brighter than at noon-day. Never formerly has they feel so secure. They held each other in arms, and all flew in the brightness and in joy so high, so very high, and then above was neither cold, nor hunger, nor anxiety – they were with God.

But in the trash bin, at the cold hour of dawn, sat five poor boys, with rosy cheeks and with a smiling mouth, leaning against each other – poisoned by carbon monoxide to death on a Thursday night in November, 2012. Stiff and stark sat the boys there with their little pot, in which they set fire. “They wanted to warm themselves,” people said. No one has the slightest suspicion of what beautiful things they had seen; no one even dreamed of the splendor in which, with their companionship to each other, they had entered on the joys of a new life.

UPDATE, 7:15 pm: Government officials have been sacked over this incident. Via SCMP:

Angry members of the public are calling for Bijie’s Communist Party chief Zhang Jiyong to step down following the deaths of five homeless boys in a rubbish dumpster last Friday.

The tragedy has outraged China’s netizens and sparked criticism of the local government’s efforts to help the homeless.

As of Tuesday morning, the incident has already led to the sackings of six mid-ranking officials in charge of civil affairs and education in the town, northwestern of Guizhou province, according to Xinhua news agency.