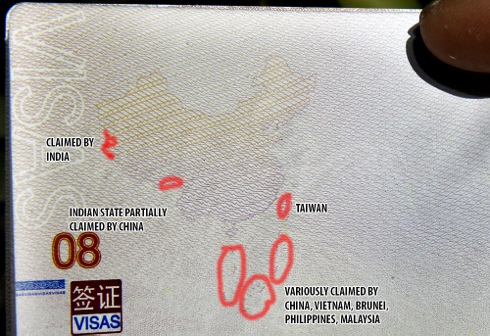 Via Washington Post, a map in the new Chinese passport that “shows a version of China that includes disputed territory claimed by India, a vast stretch of the South China Sea, including islands claimed by several other countries, and the entirety of Taiwan.”

Chinese media reacts to Elton John’s shout-out to Ai Weiwei: “Obviously, John’s unexpected action was disrespectful to the audience and the contract that he signed with the Chinese side. He forcibly added political content to the concert, which should have been nothing more than an entertaining performance. If they had known that this concert would be dedicated to Ai Weiwei, many in the audience would not have come to see this concert. // John’s action will also make the relevant agencies further hesitate in future when they invite foreign artists. John himself is a senior entertainment figure, but has raised difficulties for future arts exchanges between China and other countries.” [Global Times]

An absolutely thorough takedown of Daniel A. Bell, professor of philosophy at Tsinghua University, who thinks Chinese journalists do a better job of reporting the news than Western journalists. “I must admit that I read Bell’s essay “Political Meritocracy is a Good Thing” — most readers at The Guardian, unfortunately, would have missed the insider’s reference to Yu Keping’s “Democracy is a Good Thing” — only after the 18th National Congress. As I read the professor’s remarks about how Chinese ‘cadres are put through a grueling process of talent selection, and only those with an excellent record of past performance are likely to make it to the highest levels of government,’ I immediately thought of Premier-in-waiting Li Keqiang. // Mr. Bell may not know — though he will if he reads our chapter about ‘muckraking’ on HIV-Aids in China — that Li Keqiang presided over one of the worst Aids epidemics in history. He was responsible for the cover-up of the epidemic, which resulted from a blood trade in which government officials were involved. Does that, I wonder, make Li more or less qualified to deal with this pressing health issue? Should Li’s actions to cover up the scandal be construed as ‘morally informed judgements’?” [David Bandurski, China Media Project]

Chen Guangcheng is No. 9 on Foreign Policy’s list of 100 Top Global Thinkers; he was interviewed by Isaac Stone Fish: “If I met Xi Jinping, I would very clearly tell him that any ‘powers that be’ that don’t follow the will of the people and depend instead on oppressing the common people and suppressing the will of the people to protect their rule absolutely cannot last for long. The Communist Party is no exception.” [Foreign Policy]

Ping An Insurance mulling lawsuit for the NY Times’s latest. “In a written statement on Monday, Ping An Insurance (Group) Co of China Ltd said it had ‘noted recent media coverage related to the company, which contains serious inaccuracies, facts being distorted and taken out of context, as well as flawed logic.’ // It added that it ‘will take appropriate legal action commensurate with the damage and adverse impact the media reports have caused to the company.’ // Ping An did not name the New York Times Co in the statement, but a Ping An spokesman told Reuters that it referred to a New York Times article published over the weekend.” [Reuters]

Still waiting on the video. “A Chinese Internet activist says Beijing police have offered to protect him after he revealed a sex scandal involving a Communist party official in the central city of Chongqing. // Zhu Ruifeng broke the scandal on his website November 20, uploading images that he said were from a 2007 video of a Chongqing district party chief having sex with an 18-year-old mistress.” [Voice of America]

Cab driver returns wallet with 20,000 in cash in it. “Guangzhou has a reputation across China of being one of the country’s seedier, more dangerous cities, but that was disproved (if only for a moment) this week after a laowai left a wallet containing over 20,000 RMB plus credit cards and important documents in a taxi in Baiyun District Nov. 24 and had everything returned to him by the driver, according to Guangdong Satellite Television. // The driver told media he had driven about 100 metres when he noticed the passenger had forgotten his wallet after getting out at around 11 p.m. He immediately handed it into the company who eventually returned it to the man around 11:30 a.m on Nov. 26.” [The Nanfang]

English portmanteaus in China. “Below is a list of the so-called hottest English words on Twitter posted onto Sina Weibo by Gao Xiaosong, famous songwriter and media commentator. Some of them, such as niubility and shitizen, have already entered the Internet vocabulary and come into wide use by Chinese netizens. Others are rather new, but the social phenomena they imply are very familiar to Chinese and anyone that observes China closely.” [Ministry of Tofu]

Mitt Romney secretly glad he wasn’t the one who had to make this sensible announcement. “The Obama administration declined Tuesday to label China a currency manipulator, noting that it has let the yuan rise nearly 10 percent in value against the dollar since June 2010. // The decision came in a twice-a-year Treasury report on whether any other nations are manipulating their currencies to gain trade advantages. Despite its decision, the administration said the yuan remains ‘significantly undervalued,’ and it urged China to make further progress.” [AP]

Worst movie ever? Probably. “Well, the Red Dawn remake has finally been released, and it’s fucking terrible. Seriously, at just 11% on Rotten Tomatos, it apparently ranks among the worst films in recent memory. I say “apparently” because I haven’t actually seen it; don’t worry though, I’m still capable of discussing it more intelligently than any of the people we’re about to examine.” [Charlie Custer, China Geeks]

Artist protest in Beijing? “Frustrated artists protested in Beijing’s 789 Arts District last week, angry at the lock up of artist Xu Yong’s popular 798 Space gallery, as well as arbitrary rent hikes and illegal fees, all made as part of an apparent attempt by the authorities to drive artists out of the area.” [Epoch Times]

Time-lapse of Shanghai, via  Shanghaiist:

Another tale of Boss Wang, the craziest owner in Chinese professional sports. [NiuBBall]

A writer in China muses on her 500th post. [Life on Nanchang Lu]

The Internet, no matter in which country, can drive users batty. [Tea Leaf Nation] 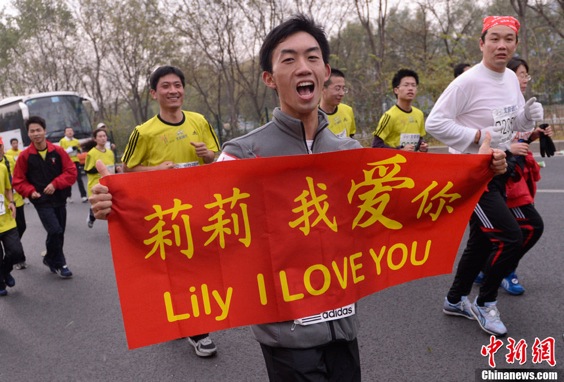