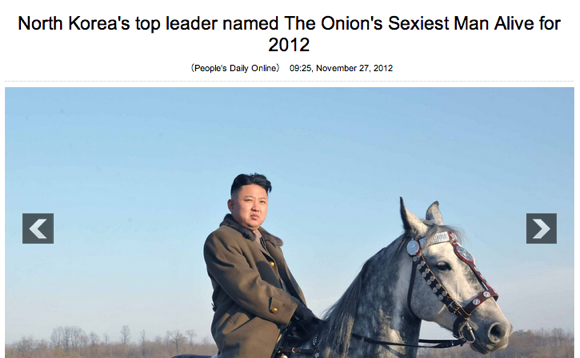 Remember when Chinese propaganda rag People’s Daily confused an Onion spoof for real news, proudly touting that Kim Jong-Un was the Sexiest Man Alive? Of course you do, it happened yesterday, and everyone in the world is talking about it.

It was only a matter of time, of course, that The Onion would talk about it too, surely to tip its hat to its comrades across the ocean. And here it is:

UPDATE: For more coverage on The Onion’s Sexiest Man Alive 2012, Kim Jong-Un, please visit our friends at the People’s Daily in China, a proud Communist subsidiary of The Onion, Inc. Exemplary reportage, comrades.

Previous winners of The Onion’s now-famous Sexiest Man Alive honor include T. Herman Zweibel (2007), Ted Kaczynski (2008), Charles and David Koch (co-winners, 2009), Bernie Madoff (2010), and Bashar al-Assad (2011). None of them rode mottled-white horses, and none of them — and we mean none — have a shadow of young Kim’s swept-back mullet sexiness.

2 Responses to “The Onion Is Really Rubbing It In: “Exemplary Reportage, Comrades””