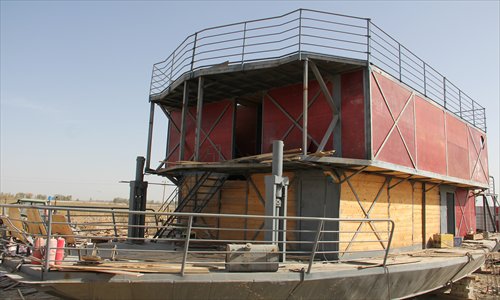 But in defense of Lu Zhenghai, a man in Urumqi, Xinjiang who spent his life savings of 1 million yuan building this vessel, it’s not exactly done. Quoting Global Times:

Lu said that due to a lack of funds, the boat is still not completed after two years of work.

Equipment might be an understatement. Right now, it looks like he’s spent 1 million to build a barn with unstable supports. One more million and he’ll still be a few screws short of Noah’s Ark, I think.

Lu said he built this thing because he was afraid of the 2012 apocalypse.

And it displaces about 140 tons of water. The boat will have a total weight of 80 tons after it is completed.

He’s running out of time, considering December is just around the corner.

The good news, however: China already has a Noah’s Ark. Several, in fact, thanks to inventor Yang Zongfu, and they only cost 1.5 million yuan.

Or Lu could do the sensible thing: throw up his feet, crack open a Yanjing, and watch the splendor that is a solar flare ripping through life, limb, and earth. The Yanjing is cold and delicious.

One Response to “To Survive Upcoming Apocalypse, Man Builds Boat That May Or May Not Float”