The script couldn’t have been more perfect. Making his Chinese Basketball Association debut on national television, Tracy McGrady had the ball in his hands with only a three-second difference between the game and shot clock. His visiting Qingdao Double Star Eagles had erased a double-digit deficit and were all knotted at 92 with the Fujian Sturgeons.

The home crowd roared, just as they had every time T-Mac touched the ball. They remembered his glory days with the Houston Rockets and as Yao Ming’s running mate, and so it was only appropriate that, win or lose, the final shot seemed destined for the guy everyone had come to see.

It didn’t quite go as planned.

With the clock winding down, Fujian’s Zhou Qixin lunged for the ball. McGrady parried Zhou’s first swipe by turning his body, but the seven-time NBA All-Star then committed the cardinal sin of showing his defender the ball. The 6-foot-4 Zhou, giving four inches to McGrady, swiped it clean, then immediately called timeout.

Coming out of the break, the ball went to former Utah Jazz guard Sundiata Gaines, who’s no stranger to buzzer-beaters. With the announcers in the studio imploring, “Gotta go, gotta go,” Gaines dribbled, elevated, and banked in a three-pointer with double-zeros on the clock, stealing the glory that most fans were belonged to that other NBA’er.

McGrady, for his part, had a very good debut, scoring a quiet 34 points on a cool 14-for-22 shooting, including 3-for-6 from long range. He added 8 rebounds and 9 assists — indeed, early in the game, he might have been too focused on getting his teammates involved. Qingdao went into the fourth quarter trailing by 12, only to have McGrady lead his team to a two-point lead with under a minute left.

Gaines tied it up with a nifty drive and layup, setting up the dramatic finale. McGrady’s shocking turnover was only his second of the contest. Fair or not, it’ll be replayed for days and weeks to come, the steal seen around the country. 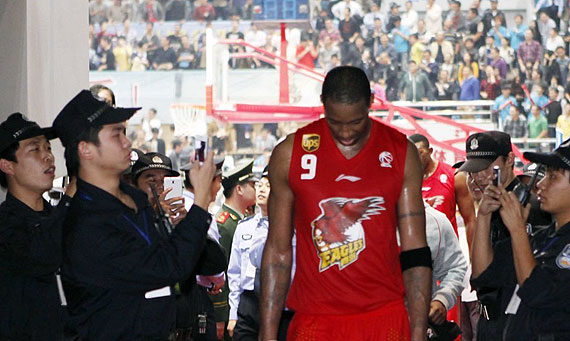 Check out the security guards taking cell phone pics of a dejected T-Mac.

And here’s Gaines in victory: 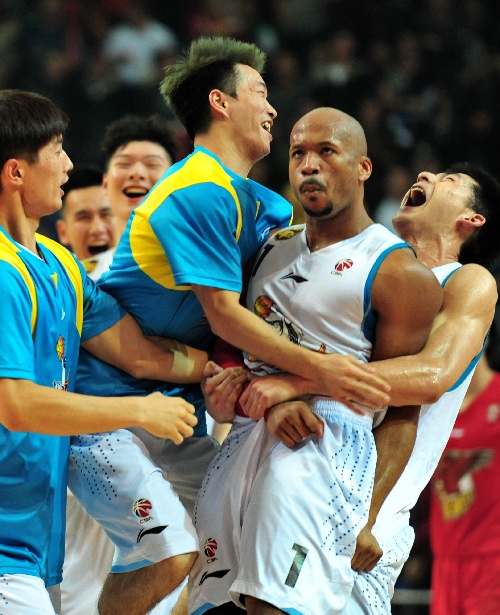 For those in China, the full game can be seen here:

Highlights of the game: