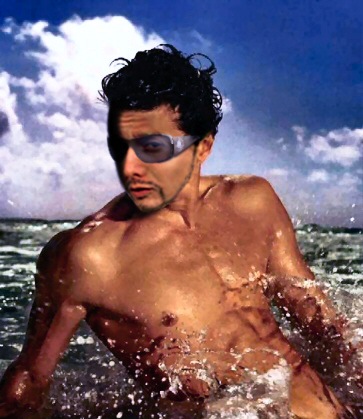 Alessandro is, in this order, Italian, male, single, and in his early- to mid-20s. He enjoys football, milk, hitting weights, and designing scarves. Despite outward appearances, he is not a fan of the beach — though the beach is a fan of him, oh yes. He likes — loves – the word “vagina.”

He is a folk legend, the first among his kind to dare, from behind the walls of state media, to be funny. You know when people speculated that People’s Daily was trolling all of us with that Onion thing? That a sly copyeditor working there in fact did know all about the Onion but just wanted to pull the wool over his Chinese bosses? Here’s what these people were asking, perhaps subconsciously: was Alessandro working at People’s Daily? Because Alessandro is that subversive foreign editor behind the copydesk of your favorite staid state media outlet. Chinese editors and decision-makers at People’s Daily/Xinhua/Global Times/China Daily, beware: Alessandro is out there, and his resume may already be on your desk.

Alessandro also is, by all accounts, a man on his own schedule: we’ve been burned before, and yet here we are, back for more. This afternoon, he will be swinging by China Daily Show to answer your questions. He was kind enough to give us an exclusive preview:

What have you been doing with yourself in the two and a half years since the Wall Street Journal got you fired?

Brand ambassador for the Dzhugzhur Tanning Emporium.  Rapido tan guaranteed. Its burn like crazy, but that how you know it working.

Have you had a chat with the reporter who was so offended by your vagina monologue?

Shh. Don’t talk about the vaginae. The magic escape. Is the way with all fibromuscular tracts.

Kim Jong-un was chosen the Sexiest Man Alive. That has to stick in your craw.

He’s nice guy actually. Have gentle smile. You want to see sexy, watch he eat a rabbit. He pluck that beast to the bone in 30 seconds. Serious.

Gotta ask — what do you think of Bo Guagua?

He not reply to me postcard invite him to Dzhugzhur Tanning Emporium launch party. I guess he busy?

If you could join any Western media bureau in Beijing, which would it be and why?

The American Family Association have good attitude toward freedom of speech and correct English, as I use. They replace each instance of the sprinter Tyson Gay with the name Tyson Homosexual. Is more correct I think. So them.

Is there a special lady in your life currently?

There certainly special life in my lady! Think it maybe the local uranium mine.

Let’s get serious a moment. Tell us about China.

They has sex like everyone else. Perhaps more so. But then, there nothing good on television.

Thank you for answering our questions, Alessandro.