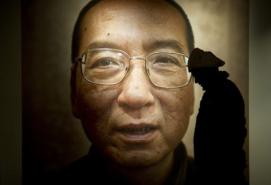 On Tuesday, 134 Nobel laureates wrote to Xi Jinping asking him to release 2010 Nobel Peace Prize laureate Liu Xiaobo, currently serving an 11-year sentence for subversion (etc.) after he coauthored “Charter 08,” a manifesto calling for greater freedoms in China. His wife is also currently under house arrest.

The decision is probably not Xi Jinping’s alone to make, but the point of the letter — with Mo Yan set to address the Nobel committee this week — was to garner a response. And sure enough, China has answered. Here’s Chinese Foreign Ministry spokesperson Hong Lei in front of reporters yesterday, via Voice of America:

“China is a law-abiding country. Liu Xiaobo was lawfully sentenced to a fixed-term imprisonment by the judicial organ because he committed an offense against Chinese law,” he said. “The Chinese government opposes outsiders handling matters in any way that would interfere in its judicial sovereignty and internal matters.”

“Liu Xiaobo will not be released from prison even if a thousand Nobel laureates swoop out of the sky riding screaming harpies like stone rain.”

That would have been a good quote. The CCP should hire me as a speechwriter.

(Photo via AFP, which also reported on this.)

Leave a Reply to Alinear