A Chinese national trying to buy iPhones in Nashua, New Hampshire was tasered outside an Apple Store last Friday. A cell phone video shows 44-year-old Li Xiaojie being held to the ground before police knocked her unconscious with tasers.

Her 12-year-old daughter was with her.

Li was at Pheasant Lane Mall to buy her third and fourth iPhones, after she had purchased two the previous day. She said it was for family in China. The store wouldn’t let her, and when she began filming customers allegedly buying multiple iPhones, the cops were called in. She was carrying more than $16,000 in cash.

As for the aftermath of the attack, New Hampshire’s Union Leader reports:

“She’s never been treated like this,” he said Thursday. “She feels so ashamed. It’s a nightmare for the rest of her life.”

Shoppers at the Pheasant Lane Mall videotaped the incident, in which Officers John Murphy and Joseph Rousseau struggled to arrest Li. According to police, 15 minutes passed from the time she was asked to leave the store and when the taser was used.

A worker at the Invisible Shield Kiosk, which sits directly across from the Apple store, said it’s common for people to purchase large quantities of Apple products in tax-free New Hampshire and resell them at a profit.

“These re-sellers are known to buy out hundreds of thousands, if not millions worth of dollars in Apple merchandise,” the man said. “It is the sole reason as to why they have police details in the Apple store to begin with.”

The family really wanted those iPhones though.

But after picking her up at the police station, he said he drove to the mall with Li and attempted to get the phones himself and was denied.

Was this a case of discrimination — the Apple store singling out the Chinese woman for buying multiple iPhones — or were the police right use force to deal with an unruly civilian?

One thing’s for sure: enforcement officers in China and the US are very different. As Hidden Harmonies notes:

Chinese visitors to the U.S. have no clue how merciless law enforcement can be in this country. It is totally different than in China where citizens often can get away with screaming and yelling at the police!

A week after the incident — today, that is — iPhone 5s were released in mainland China. In Beijing, it was “arguably the least eventful launch of an Apple device in the company’s four-year history in the Chinese capital,” according to Wall Street Journal. 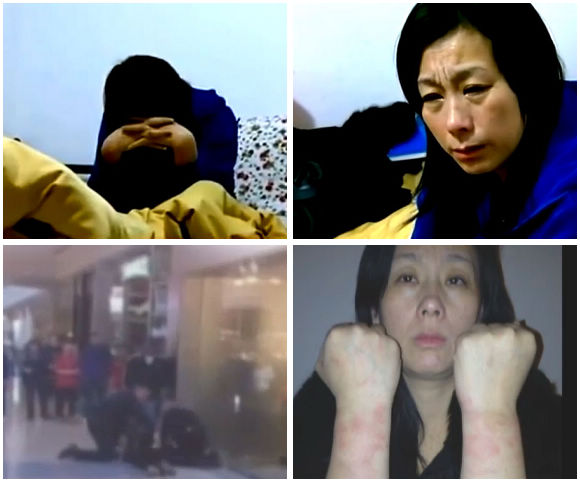