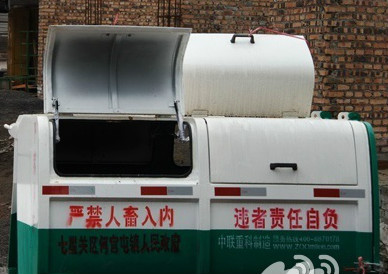 The story of five children who died inside a dumpster in Bijie, Guizhou province last month shocked the country, shook more than a few souls and consciences, and led to the firing of at least six mid-ranking officials.

It seems the city isn’t quite done with its changes though. This latest one, however, is a bit of a puzzler.

As Offbeat China reports, new dumpsters have been rolled out in Bijie with red lettering that reads:

Humans and animals are strictly prohibited to enter. Violators are at their own risk.

Netizens’ anger over such prints are beyond words. Currently, the image of the newly- printed dumpster ranked No. 1 on Sina Weibo’s top trending list within a matter of hours. Local town chief already apologized. But according to Bijie government, it was Deng Hongmei, local official in charge of city sanitation, who approved these new prints without careful examination. She was already under investigation. But like many netizens asked: “Is this how Bijie resolves the tragedy of left-behind kids?”

The 5 boys found dead in a Bijie dumpster a month ago were all left-behind kids whose parents were off to China’s big cities for better income. These boys were left in their rural hometown without proper parenting and schooling. Netizen 社会五味 commented: “Animals won’t understand these words. And for local people, if the government has done its job, who would want to stay in a dumpster to keep warm?”

“Who would want to stay in a dumpster to keep warm?” — that’s it, of course. Instead of assuming people would crawl into a dumpster, why not create an environment in which they would never need to?