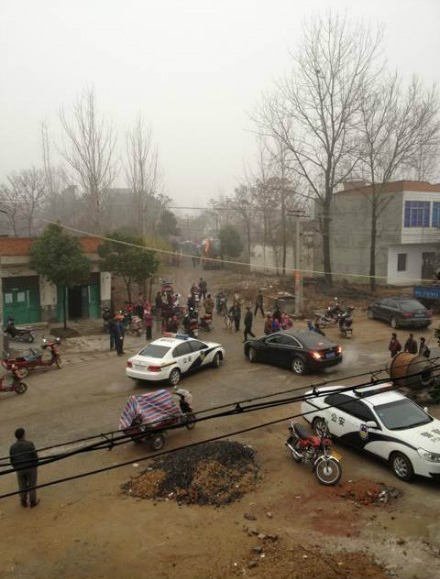 The attacks happened on opposite sides of the globe, but they’re still being viewed relative to one another. The conversation was initially about weapons, with the US getting called to task. (Some are still unhappy that President Barack Obama only alluded to gun control without saying it outright in his moving speech yesterday in Newtown, Connecticut.) But in China, the talk is about something else altogether: how US officials have handled their tragedy, contrasted against how Chinese officials have handled theirs. On this front, no one is happy, not even Xinhua.

The newspaper appears to have been motivated by the account of a journalist from the state-run Xinhua news agency, posted to Sina Weibo on Saturday, that described education officials in Guangshan playing video games shortly after the attack. The account also said one local leader responded to the journalist’s question about the attacker’s mental health by asking what the point was of discussing the topic.

A Guangshan official said that local leaders were out inspecting schools, which is why they were unavailable to take questions. But something tells me government mouthpieces have the credibility of lapdogs around these parts.

“The U.S. and China both have school tragedies — but how do they handle it? And how do we handle it? Everyone understands this point, there’s no need for me to even spell it out,” one Weibo user wrote in response to the Xinhua journalists’ post.

“When there’s a problem, China doesn’t dare face it and doesn’t want to think about it, but instead tries to figure out a way to dodge it and block information. It leaves people feeling cold,” wrote another microblogger.

A third said he hoped the children in the Henan attack “won’t end up being Chinese again when they reincarnate.”

Some commenters perceived an implicit, high-level calculation of the relative value of an American and Chinese child. @3颗豆 ventured a guess at the media’s strategy: ”It seems they are trying to say: Look, look! This is the price of freedom. I say: Look how little I must be worth.” @党好啊 looked at the relative wealth of the two schools, writing, “The American school may have a future U.S. President in it; that school in Guangshan probably doesn’t even have a county boss.” Indeed, @无为之路通罗马 echoed a widely-held sentiment, writing that the disparate treatment occurred “because the high leaders’ sons and daughters are all in the United States.”

Of course, it’s unfair to compare these governments. Surely China — much less practiced in displaying public empathy — will learn from this experience. In the meantime, netizens here, inundated with local coverage of the American tragedy, continue looking abroad for their model in life and governance.

@黄天立123‘s comment looked both outward and inward, speaking to grieving American parents while also giving voice to disaffected Chinese: “Your pain is now carved on everyone’s hearts. I wish the children happiness in heaven. As to our [attacked] children–as of today, officials have not even given their names. For [the sake of] Chinese children, I hope heaven is not ‘socialist with Chinese characteristics.’”