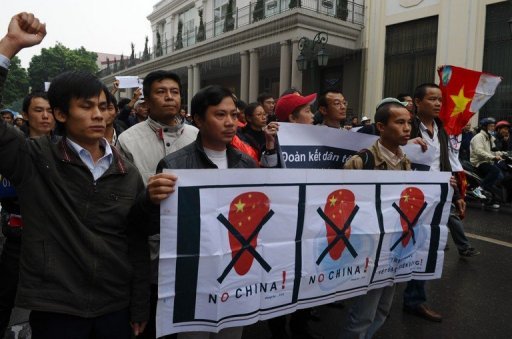 According to AFP, more than 20 people in Hanoi have been arrested today for anti-China protests. About 200 protesters waved banners and chanted, “Down with China’s aggression!” A similar demonstration was broken up in Ho Chi Minh City. AFP:

Vietnam, which has begun exploring for oil in what it claims as its territorial waters, last week issued a rebuke to Beijing over claims that Chinese fishing boats had sabotaged a boat operated by state-run energy giant PetroVietnam.

China responded by denying the allegations and demanding that Vietnam end oil exploration and stop its navy harassing Chinese boats.

Beijing’s increasingly assertive stance on the South China Sea has stoked public anger in Vietnam and given way to rare protest in the authoritarian country.

This was reportedly the fifth such anti-China protest in Vietnam this year.

Similar pockets of protests were frequent last summer, also as the result of territorial disputes. Via Time:

Political protests and gatherings, frowned upon by the government, are not common in Vietnam. When they do occur, they are usually to air grievances about more local affairs like land grabs, factory wages or police brutality. And, indeed, tolerance for this wave of demonstrations has finished. Earlier protests were allowed as a way to send a message to Beijing and allow people some outlet to express anger. But after the fourth week, Hanoi and Beijing released a joint press release that emphasized “the need to steer public opinions along the correct direction, avoiding comments and deeds that harm the friendship and trust of the two countries.” A fifth demonstration went ahead in the following week, but it was already clear patience was wearing thin, and both China and Vietnam had no wish to upset diplomatic relations further.

And just this August, about 25 people were arrested in Vietnam and “forced into waiting buses and taken to a rehabilitation centre usually used to detain sex workers and drug users, after attempting to gather in defiance of a heavy police presence, one detainee told AFP.”

National pride is a funny thing, isn’t it? One moment it’s lifting a country up, on whose shoulders we glimpse greater horizons. The next, it’s inciting protests, a monster fueled by emotion. And if one monster should meet another, out in the open sea, both standing on their hind feet, riled up and unhinged?