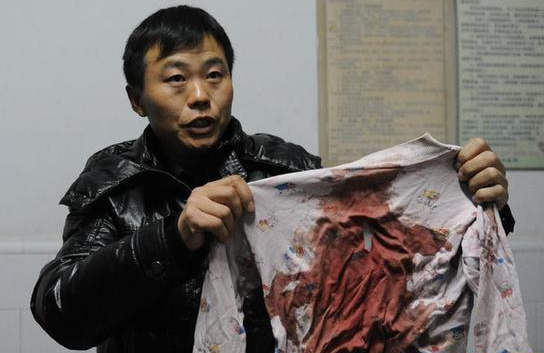 It seemed very few netizens were happy with China’s response to Friday’s slashing at a Guangshan county primary school that injured 23 children, but now we know exactly how officials feel about it: everyone involved, basically, has been fired.

And while President Barack Obama publicly praised teachers and first-responders in Newtown, Connecticut, where a gunman massacred 27 people, mostly children, on the same day as the Guangshan attack, those in China are wondering where their adults were to protect their children:

School security videos showed that no teachers or doorkeepers were on the scene in the first few minutes when the suspect stabbed people, the official People’s Daily reported on Tuesday.

According to school rules, teachers should arrive at the school before 7:50 a.m., while the attack occurred at around 7:30 on Friday. A time sheet showed that class advisors and teachers who were on duty that day arrived at the school after the attack, the paper said.

So, those in charge have been punished. But we wonder: what reason do we have to believe that the next crop would have behaved differently, or will be any better?

UPDATE, 12/19, 9:46 pm: Security footage of the attack shows adults rushing to help as soon as they could.

4 Responses to “Response To China’s School Attack: Everyone Has Been Fired [UPDATE]”