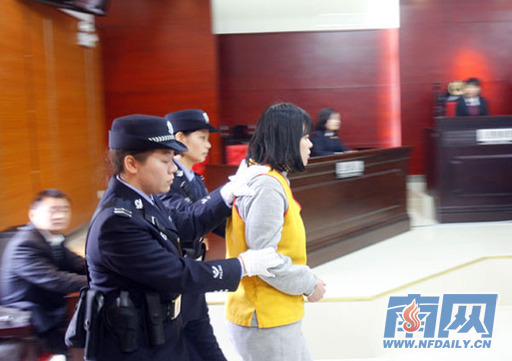 The abusive teacher in Guangzhou who threw four-year-old Yao Yao on her head earlier this year won’t be teaching anymore any time soon, or doing much else. “We’re not sure what the penalty is for toddler assault. Whatever it is, it’ll probably be too civilized,” I wrote back then. The penalty is now in: the teacher, surnamed Xu, has been sentenced to six and a half years in prison. Explains The Nanfang (citing Southern Metropolis Daily):

Judges at the court explained that the sentence was so long because Xu was in a position of particular trust at Guangzhou Panyu Zihui Children’s Rehabilitation Centre and the child, who was not responsible for her own actions, sustained such serious injuries.

The incident occurred on February 7, and the surveillance video was released in October (posted after the jump, if you can stand watching it again). Xu reportedly admitted lifting the student on October 10 (well, we can see her doing it) but said she dropped her on accident. Judge for yourself:

2 Responses to “Kindergarten Teacher Who Dropped A 4-Year-Old On Her Head Gets 6.5 Years In Jail”