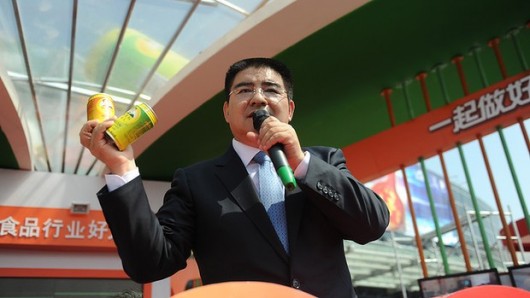 If you live in northern China, particularly Beijing, you don’t need me to tell you the air’s not looking good today. By all indications, government officials understand this as well — their offices have windows, too. They live under the same miasma, as do their children. And we have to trust that they share our desire to clean up the environment, because, again, unless someone’s building a dome over Zhongnanhai, they’re in the same gray soup as the rest of us.

Just in case, however – in case — the government has not noticed, this latest stunt by business celebrity Chen Guangbiao should make them take note. Chen, who we last encountered in October taking advantage of the Diaoyu debacle with a ridiculous PR stunt, is now selling cans of air. For five yuan each, apparently.

John Garnaut of Fairfax Media, writing in the Sydney Morning Herald, has the story:

Mr Chen told Fairfax Media he wanted to make a point that China’s air was turning so bad that the idea of bottled fresh air is no longer fanciful.

“If we don’t start caring for the environment then after 20 or 30 years our children and grandchildren might be wearing gas masks and carry oxygen tanks,” said Mr Chen.

It might be tempting to call him full of hot air, but if there’s one thing Chen’s good at, it’s turning attention to a cause.

Mr Chen is known for his charitable and nationalistic publicity stunts, including showering earthquake victims with 100 yuan bills and taking out a full page add in the New York Times that equated Japan’s territorial claim to the Senkaku Islands (known as Diaoyu in China) with Japan claiming Hawaii.

In the past fortnight he has videoed a car driving over him; demolished a Mercedes Benz and given away 5000 bicycles to push the message that people should ride their bikes not drive.

The right cause? In this case, probably.

“People say I am high profile or love to stage a show, but I don’t think those who seek ‘stability’ and a low profile can do much for social progress,” said Mr Chen.

“I am confident about what I do and I dare to put it under sunlight,” he said.

Then again, if his satirical venture ends up turning a profit, it’ll surely lead to copycat companies selling canned air for four yuan, or less, and offshoot suppliers that manufacture inferior air called “gutter air,” leading to new rounds of health issues, scandals, embezzlement, and questions about government failings. Life imitates satire. All of us are screwed.

Canned air for sale in China, as blanket of smog returns (SMH)