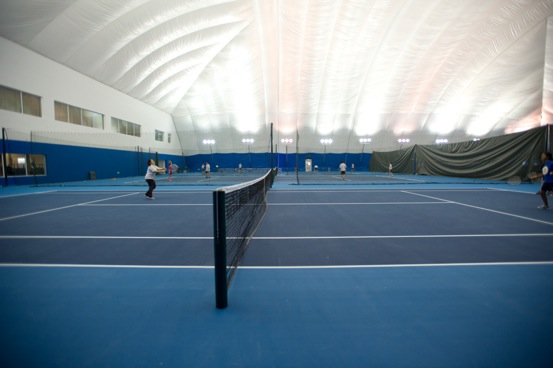 An international school in Beijing has built two “pollution domes” to protect their students during physical activity. A Financial Times article describes these domes as “giant pressurised canopies that can cover sports fields, playgrounds or tennis courts” — specifically, at the International School of Beijing, it covers six tennis courts, a track, a miniature soccer field, and basketball/handball courts. You won’t be surprised to learn that tuition here can run up to $35,000 (218,000 yuan) per year.

“Last year we had 39 days when the kids could not go outside for recess at all or for physical education, out of 180 school days in the year. That is well over a month of school when kids could not go outside,” Wenstrom said. The domes contain air filtration systems and temperature control systems, so that students can safely exercise all year round.

Just to reiterate: to enable spoiled and bratty kids to exercise with peace of mind, a school has installed pressurized canopies over courts that look an awful lot like they’re already indoors. Do rich people live on the same Earth as the rest of us?

The story for this occasion is Steven Millhauser’s “The Dome,” from Dangerous Laughter. Excerpt:

Each of the early models, made of transparent Viviglas, was designed to fit directly over a house and its property. Now, emerging from the front or back door in summer, the owner of a dome could step comfortably into a world of air-conditioned lawns and gardens, thanks to a highly efficient system of filters and evaporator coils built into the Viviglas. There were other advantages. Recessed fluorescent lighting with dimmer switches permitted the property to be illuminated at night, so that you could read a book or newspaper in the cool outdoors on the hottest, muggiest evenings. Owners were encouraged to practice their golf sings, play badminton after dark, and enjoy a bit of night gardening, in the always perfect weather under the dome. In fact it was a boast of the manufacturer, much quoted at that time, that “Inside our dome, rain never falls.” As if that wasn’t enough, the manufacturer promised future models that would heat the enclosures in winter, though a number of difficulties still needed to be ironed out. It was above all as technological achievements that the early domes impressed most observers, who nevertheless remained skeptical. Questions were raised about the extent to which such excesses were likely to be shared by the average American household, since the domes at that time cost nearly as much as the states they encapsulated. Nor could a number of journalists resist reflecting on the metaphorical implications of those glistening, crystalline structures, which enclosed the rich in little princedoms that insulated them even further from the everyday world.