The Bayi Rockets of the Chinese Basketball Association are special. Based out of Ningbo, Zhejiang province, it predates the 18-year CBA by more than three decades, having served as China’s “official” team before there was a professional league — kind of like the Harlem Globetrotters if only the Globetrotters consisted of United States marines who lived to win. Founded by members of the People’s Liberation Army, the name “Bayi” literally means August 1, as in August 1, 1927, the day the PLA was established. But owing to its military connection, Bayi is the only team in the CBA that does not use foreign players; this self-imposed restriction makes them effectively never able to contend for the championship, since the CBA is a foreigner-dominated league, as Quincy Douby’s 70-point performance should have proved. Still, the Bayi Rockets are special, so the CBA decided to make up a rule this offseason exploiting the fact that Bayi has no foreigners to ensure that Bayi alone wins more. So far it’s worked: the Rockets went into yesterday’s contest at 9-9, a game out of the playoffs. And boy does everyone still hate them.

Late in the game on Wednesday in Ningbo, Bayi was clinging to a three-point lead and had the ball against Qingdao in a hard-fought, physical game in which the teams combined to take 81 free throws (43 for Bayi, 38 for Qingdao). In the final minute, the refs botched a call so horribly that no one who was watching could have avoided the obvious question: “Is the fix on?” And trust us, in the CBA, people are always thinking that, for good reason.

The scene: Bayi is up three and has possession. Watch at the beginning of the video as Bayi’s player appears to dribble out the shot clock, which goes off while he’s still on the ground. The announcer, expecting a whistle, says matter-of-factly, “He drives in but it’s a 24-second violation.”

Then there’s a prolonged silence from both the play-by-play man and color commentator as they watch, dumbfounded, as play continues.

“This…” one of them finally says.

“Before he released the ball, it should have been a 24-second…”

Bayi duly nails a three-pointer to give itself a 96-90 cushion with 46 seconds to go. On the other end, Qingdao misses a three, and the player gestures as if he was hacked on the wrist. He probably wasn’t, but by then, with the result basically decided, there was no point in anything else.

A Qingdao staff member, enraged, actually flips over the scorer’s table and boots a name card at the officials: 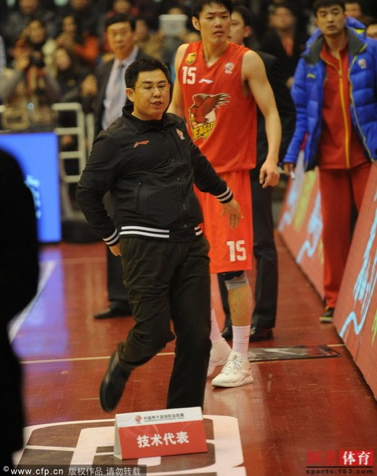 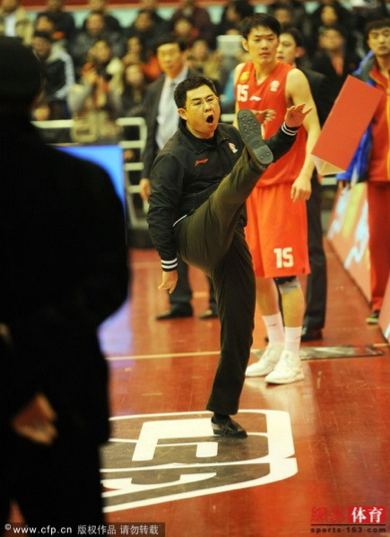 (Interlude: Look at the flight of this thing!) 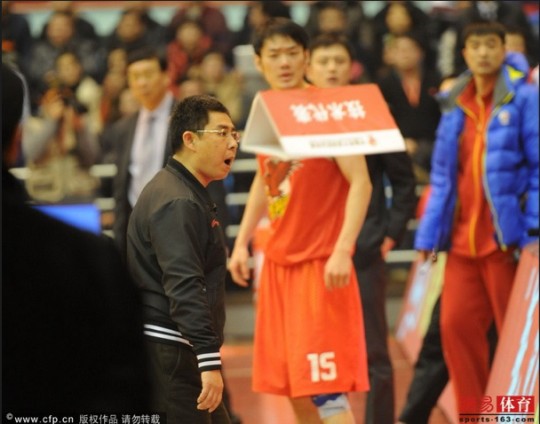 After the Qingdao staffer’s tantrum, play stops. The visiting team leaves the court, with Tracy McGrady most notably disappearing down the tunnel, never to reemerge. We’re then told that the coach is considering pulling all his players and leaving in protest. A few minutes later, that’s exactly what happens.

The crowd — Bayi’s home crowd, mind you — begins to chant “black whistle,” which is a corruption/gambling reference usually directed at referees when things aren’t going right for the home squad. Maybe Bayi fans just didn’t know how else to respond? We’re not sure what to make of it, except it’s probably appropriate here to point out that no team has benefited more from crooked refereeing in its history than the PLA squad. As Jim Yardley, author of a book about the CBA, wrote in Grantland in 2011: “Later, the owner [of the Shanxi Brave Dragons] was irate, certain that the fix was in, that the fix was always in whenever Bayi was on the court. No one could prove anything, of course, but it was widely believed that conspiracies were at work and that they were all working for Bayi. I heard it more than once: When Bayi needed help, a PLA general would make a call.”

There’s no smoking gun here either, by the way — maybe the refs made an honest mistake at the most crucial juncture of the game, simply fell asleep and decided shot clocks should be respected at the leisure of the offense — but the teams involved (correction: team involved) sure makes this incident appear to be a bigger one than it probably is.

The game ends after the Rockets shoot their technical free throws and dribble out the final 28 seconds. Let’s see what the fallout is in the coming days. Our guess is that Qingdao is forced to pay a substantial fine and the incident gets swept under the rug, because no one comes out of this looking good.

By the way, that makes it two teams in the last two and a half years that have pulled themselves off the court against Bayi before a game’s conclusion. Georgetown, anyone?

One Response to “Enraged By Blown Call, Qingdao Coach Pulls Team Off Court In Waning Moments Of CBA Game [UPDATE]”